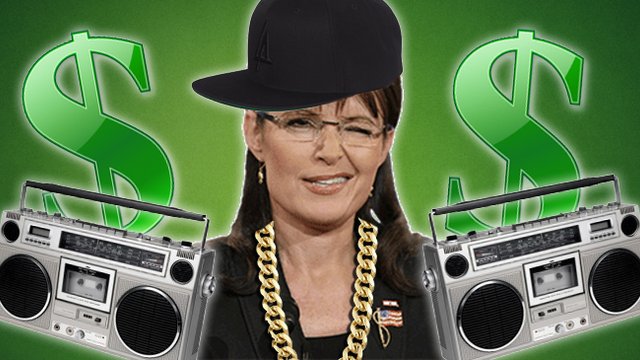 She can see the top of the charts from her house.

Y'ALL... we might be about to witness the birth of a brand new Rap god! It all started when the problematic Sarah Palin endorsed the equally problematic Trump in his gigantically problematic campaign for the US Presidency. Give the meme a mic and she will spit rhymes so life threatening that you'll need a defibrillator on stand by.

(She also hinted that she was about to endorse the wearable paperclips movement by the looks of things but that's an entirely different article.)

Here she is spitting acapella rhymes so fire they could set Trump's hairspray laden hair alight.

And here's the finished cut, fresh out the studio, ready to tear up the charts.

J-Kwon caught wind of the newborn hip hop sensation and immediately remixed her onto his smash hit, 'Tipsy'.

Adele felt like she needed a lil' somethin' to keep the continued success of '21' afloat.

Sizzle P - if you will - is about to be responsible for relaunching Timbaland's takeover. You can thank her later.

Even iconic British band Steps jumped on the Palin wagon and immediately improved their pop track, '5, 6, 7, 8'.

This Ciara remix is about to go straight to number one in 96 countries. SMELL YA LATER, BIEBER!

But while these iconic artists were keen to endorse her new mixtape, sceptics were quick to point out that she might be guilty of copyright infringement.

So rude and unoriginal, Sizzle P.

But don't worry... Iggy always has her back.

And as a tasty little treat, she teased us with her exclusive cover of Dead Or Alive's You Spin Me Round and left us all waiting for that world tour announcement.

How To Get A Record Deal In 6 Seconds