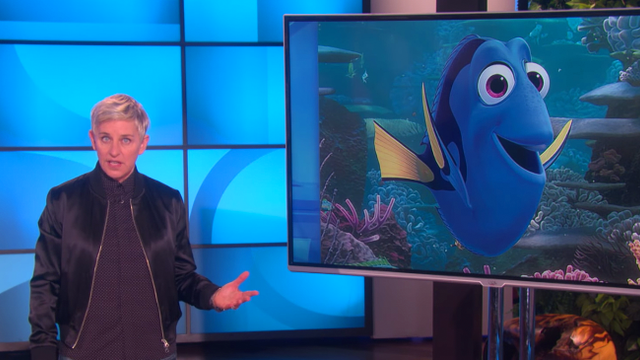 "Because that's what you do when you see someone in need - you help them."

Ellen DeGeneres just took some time to make a pretty huge statement about the Muslim travel ban - without even saying a damn word about it.

A day after it was made that citizens of seven Muslim-majority countries would be temporarily suspended from entering the US, it was reported that Trump treated the residents of the White House to a screening of Pixar's latest banger, Finding Dory. Ellen, the voice of Dory, heard about this and then proceeded to use the film's storyline to explain the travel ban - pointing out some pretty stark similarities to get her point across.

If you haven't already seen Finding Dory, the story follows the journey of Dory, an Australian who teams up with a bunch of different fish to help her find her family in America... Ellen will explain the rest. Watch the video below:

Celebrities have been pretty outspoken over the past few days in regards to President Trump's controversial executive order. For someone who personally chooses to remain fairly apolitical, Ellen's comments on the ban were simple and made a clear point.

Even though Dory gets into America, she ends up separated from her family. But the other animals help Dory. Animals that don’t even need her. Animals that don’t even have anything in common with her. They help her even though they’re completely different colors, because that’s what you do when you see someone in need — you help them. That is what I hope everyone who is watching Finding Dory has learned.