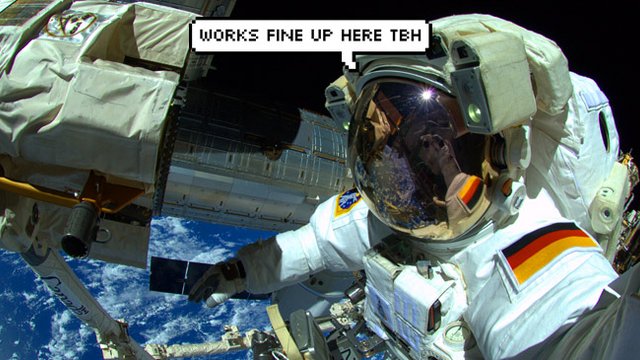 Cosmic rays can do one imo.

When your phone freezes for no apparent reason, you probably start blaming the manufacturer like we all do. Unless your name is Naomi, in which case you probably get into a violent rage and throw the phone at your assistant's head.

Next time your smartphone freezes you might want to think twice before cursing the gods of Apple or Samsung because the real problem might not be the manufacturing, as a new study has suggested the real culprit might actually be cosmic rays from outer space. No, we're not joking and yes, it's truly fucking wild.

So this is what happens. Cosmic rays are constantly falling down on earth all the time. But when they strike the Earth's atmosphere, they create secondary particles including energetic neutrons, muons, pios and alpha particles. Millions of them strike your body every second. They're harmless to humans but electronic systems aren't so lucky.

The problem is that some of these particles carry enough energy to interfere with microelectronic circuits, like those in the back of your phone. And because the size of computer chips is shrinking in phones and other devices, and we're becoming increasingly reliant on said devices, device are becoming more and more susceptible to failure. So the chances are if your phone stops working for no reason, it could be an particle from out of space. Weird huh?

Well, it's actually kinda scary too. Bharat Bhuva, a professor and members of Vanderbilt University's Radiation Effects Research Group, who conducted the research, named a number of incidents that illustrate how catastrophic the problem can be. A Belgian voting machine in 2003, caused an error which resulted in over 4,000 erroneous votes. And in 2008, the autopilot system in a Qantas A330 failed, causing the plane to buck and dive by 690 feet in 23 seconds, injuring 119 people on board. Both incidents are thought to have been caused by cosmic rays interring with the electronics.

According to New Atlas, Bhuva said industries like aviation, IT, transportation, spacecraft, communications, power and medical technology are addressing the problem in their devices, but so far consumer electronics have been lagging behind. Bhuva is calling for better protection in the design of products to avoid further problems. Amen to that.