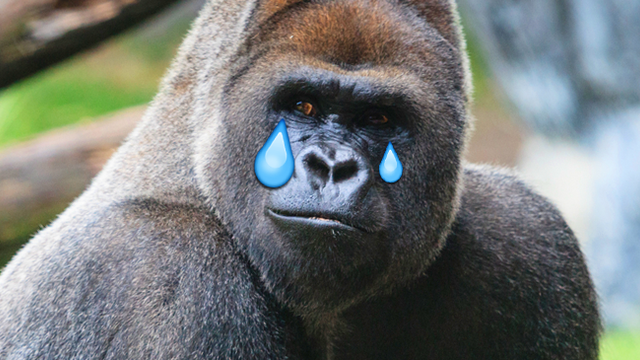 "Someone wants the whole blood line dead, I think."

Ever since Harambe tragically left this earth back in May 2016, our hearts have been heavy. We've dedicated time and effort into keeping Harambe's memory alive, whether it be using memes as a coping mechanism or composing a few banging tribute songs on Garage Band in our bedrooms.

Just when we thought it was over, 2017 has served us our first slap in the face. It is with great sadness that we announce the death of Harambe's beloved grandmother, Josephine. Yes, another member of the family has departed the animal kingdom. What a rough year it's been for them.

To add insult to injury, it transpires that Grandma Josephine was ~killed~ by staffers at the zoo. Now, before you get all angry and start forming your conspiracy theories, she wasn't murdered in cold bold... it sounds like it was genuinely for the best. Josephine was a forty-nine year old silverback gorilla who had been diagnosed with terminal health issues and she was "humanely euthanised" by Miami Zoo on Wednesday (Jan 18).

Josephine was born in the wild and brought to Miami Zoo in 1983. She gave birth to a boy in captivity called Moja, who in turn produced the legendary Harambe.

Tributes have been pouring in for Harambe's nan with all five stages of grief apparent across Twitter.

#RIPJosephine the grandmother of the sweet prince #Harambe. Now you can be reunited with him in peace.

Oh God, #Harambe's grandmother has died. It's starting all over again.....

harambe's grandmother was put down today. someone wants the whole blood line dead i think

#Harambe grandmother was the best of gorillas, aside from the great one himself. You were taken from us too soon, gran-gran Harambe.

First Harambe, now his grandmother Josephine... can't understand how this world we live in can be so cruel.

Harambe's grandmother Josephine died sad fuckin day I tell ya been a rough couple months for that family.

*sighs* At least she lived long enough to see her grandson be a contender for President of the United States.