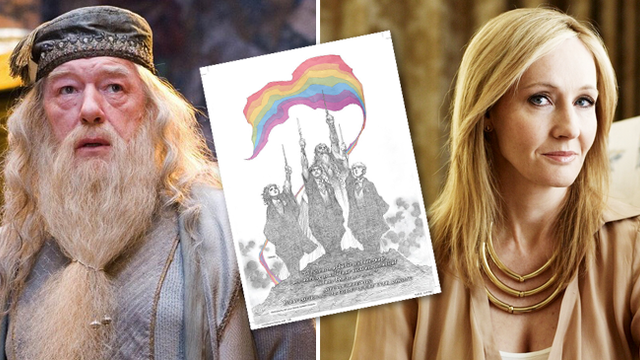 "Differences of habit and language are nothing at all if our aims are identical and our hearts are open."

It's been a few months since the awful, awful shooting at Orlando's Pulse Nightclub but tributes are still being paid to victims every day.

JK Rowling has teamed up with DC Illustrator Jim Lee to contribute to those moving tributes by creating an illustration for 'Love Is Love', an anthology book that will benefit Equality Florida in support of the victims and families of Pulse.

For the illustration, Rowling agreed to let Lee use the likeness of Harry, Ron and Hermione along with Albus Dumbledore. She also authorised the use of a quote from Goblet of Fire, that reflects tolerance, equality and love, which reads: "Differences of habit and language are nothing at all if our aims are identical and our hearts are open."

The illustration features Harry, Ron, Hermione and Dumbledore with their wands raised, hoisting a rainbow flag above them.

Thank you to @JimLee & @jk_rowling for coming together to create this beautiful piece of art for the Pulse victims in the Love Is Love comic pic.twitter.com/PTCDxV3G4e

It's a touching tribute given that many of the victims were big fans of Harry Potter, particularly 22-year-old Luis Vielma who worked at Harry Potter World in Orlando.

Luis Vielma worked on the Harry Potter ride at Universal. He was 22 years old. I can't stop crying. #Orlando pic.twitter.com/Nz2ZCWxNsS

All of the art produced for the book, available on Dec 28, will be auctioned off next year and all proceeds will go to Equality Florida. We imagine this particular piece is going to be sold for a LOT of money.