This is a lot to process...

Another day another drama. Just yesterday the Kardashians received backlash for using the term 'anorexic' as a compliment and now they're involved in another controversy. It all started when Instagram model Amirah Dyme shared a photo of Kim on her feed praising her with the caption '😭❤️'. So far so normal. However, model Tyson Beckford decided to let his thoughts be known and they are problematic af.

The 47 year old star commented on the post writing first: "Sorry I don't care for it personally" and then went on to add: "She is not real, doctor fucked up on her right hip 🤢". This is just not on. Regardless of whether or not Kim has even had plastic surgery, it's not okay to body shame her. Everyone has different bodies and critiquing people for not fitting certain aesthetic standards is really damaging.

Of course Kim wasn't here for this. The reality TV mogul saw The Shade Room share the comments on Instagram and chose to clapback at Tyson. This is where things get even more messy. Kim wrote: "Sis we all know why you don't care for it ☕️🐸💅" and the response has been divisive to say the least.

Obviously Kim has every right to defend herself. In fact, many fans have been praising her for it. However, people are calling out her reply as lowkey 'homophobic'. They object to the comment because they see it as an implication that Tyson doesn't like Kim's body because he is gay. Implying things about people's rumoured sexualities is always indefensible.

Here is the interaction in full:

Naturally the internet is not impressed. Here are just a few of the reactions to it.

Some are not here for either Tyson or Kim.

Tyson ain’t have to say shit. And the fact that Kim’s first response was to try and call his ass gay as a defense shows me where her mind is. That’s y’all fave tho. Y’all be on here DEFENDING her and she thinks y’all are just a bunch of f*gs. Loooool

This was all unnecessary.

Others are keen to point out that Kim hasn't been on a winning streak lately.

So kim k loves being called anorexic, has 'nothing bad to say' about trump and tried using being gay to shame Tyson Beckford because he wasn't attracted to her fake body...try tell me she is not toxic one more time pic.twitter.com/zRBj3GlX4I

Kim said she had 'nothing bad to say' about Trump on Jimmy Kimmel this week.

A couple of people aren't happy with Kim using the term 'sis'.

Kim Kardashian called Tyson Beckford "sis" and implied that he was gay because he said that her body was fake.

They getting way too comfortable....

It's easy to see why it can be seen as homophobic in this context.

A few think that Kim doesn't practice what she preaches.

Kim K is the type of woman who wanna be for equality until you make her mad. Then she'll call you gay, implying that Tyson is in the closet and being gay is a read. Anyone who agrees with her is just as problematic. pic.twitter.com/WVu5YST2Bm

This doesn't fall in line with her ideals.

Let's not leave Tyson off the hook though.

It’s wack to imply Tyson Beckford is gay but like it’s also wack for a man to shit on a woman for no reason? Why did the world need to know Tyson thinks Kim is ugly? Men always wanna announce who’s ugly

This needs to stop.

Ultimately, they are both in the wrong.

i saw this earlier and there was so much going on that I didn't even comment.

1. Tyson Beckford need some business or a hobby. He was out of line.
2. Kim K using sis and then insinuating Tyson is gay as an insult is so cheap and old and homophobic. https://t.co/YLE7g32CGA 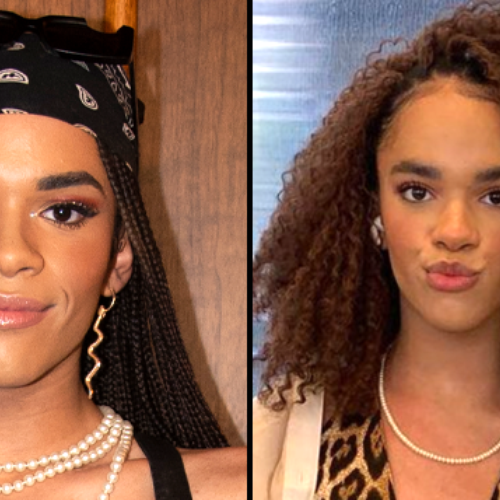