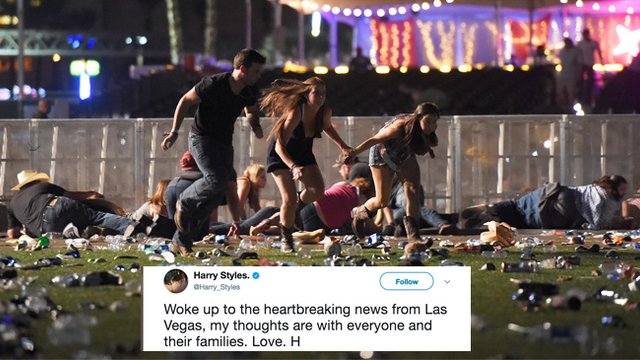 A gunman fired on the Route 91 Harvest country music festival from a hotel overlooking the event.

Musicians and artists are expressing their sadness and disbelief after a mass shooting incident at a music festival in Las Vegas.

As reported by The Guardian, last night (1 Oct) at least 58 people were killed and 515 injured after a gunman fired on the Route 91 Harvest country music festival from a hotel overlooking the event. Police have named the suspect as Stephen Paddock, a 64-year-old local man. It is believed he killed himself before police could arrest him.

Country artist Jason Aldean was performing at the time of the shooting. He has since posted on Instagram to confirm that him and his crew are safe.

Tonight has been beyond horrific. I still dont know what to say but wanted to let everyone know that Me and my Crew are safe. My Thoughts and prayers go out to everyone involved tonight. It hurts my heart that this would happen to anyone who was just coming out to enjoy what should have been a fun night. #heartbroken #stopthehate

Given that this tragedy happened at a music festival, many artists have expressed their condolences to the victims, their families and to the people of Las Vegas. Here's what they've had to say.

Woke up to the heartbreaking news from Las Vegas, my thoughts are with everyone and their families. Love. H

fuck. feel sick for the victims of las vegas and their families. i'm so sorry

Saying a prayer for all the victims & their loved ones, also for the residents & visitors of Las Vegas! This was a horrific act of terror!!

Thoughts are with the victims and families of this terrible tragedy in Vegas .

Love is the only thing we can offer one another at this point. So love really fucking hard. Always.

Alex from All Time Low

Sending my love to Las Vegas. Rough news to wake up to. Stay safe and be good to one another.

Woke up to terrible news. My prayers go out to Vegas right now, this is horrible

every concert should be the epitome of a safe space. our hearts ache for those who lost their lives or were injured in las vegas last night.

The news about Vegas is devastating. Sending all our love to the people there right now

Please, if you are in Las Vegas, take cover there are multiple shooters on the loose, twenty people are dead. Find cover and hide.

Praying that this madness stops...what has the world come to

Vegas keep safe. I'm so sorry for what is happening right now. It is horrific just to see the videos.. I can't imagine what you are feeling.

Horrifying scenes in Las Vegas. My heart and soul is with all the victims & their families and friends. Everybody please stay safe.

My heart is breaking for everyone in Vegas tonight. Simply devastating. So much loss.

Devastated waking up to the news of the shooting in Las Vegas. Praying for the victims and their families and friends. #PRAYERSFORVEGAS

My heart goes out to all those affected my this senseless tragedy in Las Vegas.

How a place of excitement and fun turned into a war zone with such a high powered weapon is insane. Senseless violence needs to stop now

sick to my stomach. we have a show tonight & i don't know what we're supposed to tell people. other than WE NEED GUN CONTROL.

I'm not sure what words I could use here that would work. I am so hollow and angry and sad for the people of Las Vegas. I love you.

Get rid of guns. Stop being childish. There is no excuse. It's pathetic.

My heart is breaking for Las Vegas. We need love, unity, peace, gun control & for people to look at this & call this what it is = terrorism.