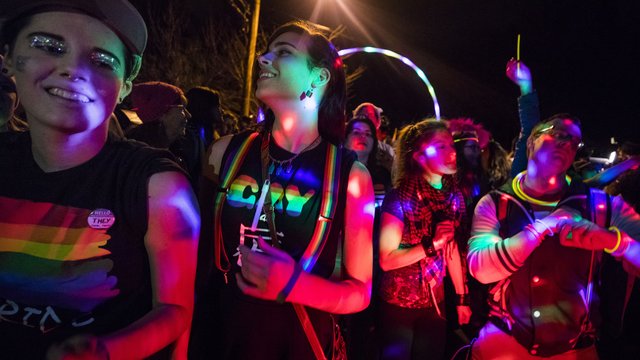 This Friday (Jan. 20) will mark the hotly contested ascension of United States President-Elect, Donald Trump, and his VP, Mike Pence, to the highest offices in the United States of America.

Both hold highly divisive views about women, reproductive rights, and the LGBTQ+ community. Pence, in particular, has advocated for conversion therapy (a medically discredited method of trying to change one's sexual orientation) as well as sponsoring legislation in his native Indiana that would make it legal for businesses to discriminate against LGBTQ+ individuals.

The fear amongst these groups is palpable but many queer folk and LGBTQ+ allies are taking the fight right to Pence's doorstep. Hundreds of protestors could be seen dancing in front of the Vice Presidential residence last night (Jan. 18) in a perfect show of resistance being called a "queer dance party".

Rihanna's "Work" was a fan favourite.

Hundreds are dancing to @rihanna outside of VP Elect Mike Pence's DC house to protest what they view as his anti-gay policies. pic.twitter.com/Kim1nbAjHi

And, of course, Whitney's "I Wanna Dance With Somebody".

These are the streets outside Mike Pence's house in D.C., shut down by activists throwing a Queer Dance Party tonight. Pure jubilance. pic.twitter.com/GrJAgvSZBh

Hello, hi is Queen B?

Marchers dance to @Beyonce and shout: "We are here, we are queer, #wewilldance!" @postlocal @werkforpeace @DisruptJ20 pic.twitter.com/dYycB9MgIt

"We are here / we are queer / we will dance" chants at #LGBTQ dance party outside Mike Pence's house on his last night living there pic.twitter.com/N4ZkQVF8qB

There were also calls for "Daddy Pence" to come outside and join the party but it seemed the VP elect had already left (likely because news of the planned protest was widespread by the 17th). The protest was organized by WERK for Peace and DisruptJ20. WERK for Peace is a grassroots organization that aims to spread peace through dance and was formed following the Orlando Pulse night club shooting.

I, for one, am not looking forward to Trump's America but if it means more dance party resistance then count me in!