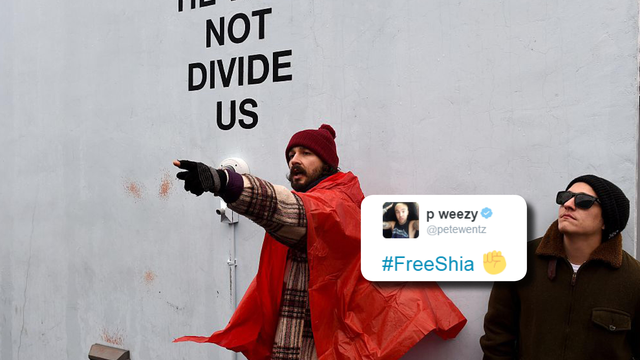 Shia LaBeouf has been arrested by NYPD following an alleged altercation at the site of his anti-Trump art installation. The 30-year-old actor turned artist launched a live streaming project that will run the length of Donald Trump's presidency. The project is called #HeWillNotDivideUs.

Shia was taken in by police after shoving a man who claimed that "Hitler did nothing wrong".

White supremacist yells into the camera and Shia LaBeouf shuts him down. This has been a very interesting live stream. #HeWillNotDivideUs pic.twitter.com/CqY9pLobWi

What did the man say that made Shia so angry?

The man can be heard getting up close into the camera and uttering the words "14 88". 14 88 is a dog whistle used by neo-nazis and refers to the 14-word white nationalist slogan about preserving the white race. 88 is a code for "Heil Hitler". Shia LaBeouf is Jewish.

There has been an outpouring of support for Shia following hs arrest.

a Jewish man gets arrested because he was defending himself against a nazi supporter, who was verbally attacking him. we in 1945 #FreeShia

Shia was nonviolent, you'll arrest him for verbal "assault" and then ignore rampant hate speech on a day to day basis #freeshia

shia, a JEWISH MAN, was arrested for defending himself upon being harassed by LITERAL nazi- sympathizers.. i am SPEECHLESS #freeshia

At this time, Shia has been freed by police but is yet to issue a statement. We will update if and when Shia speaks on the events and subsequent detention by NYPD.