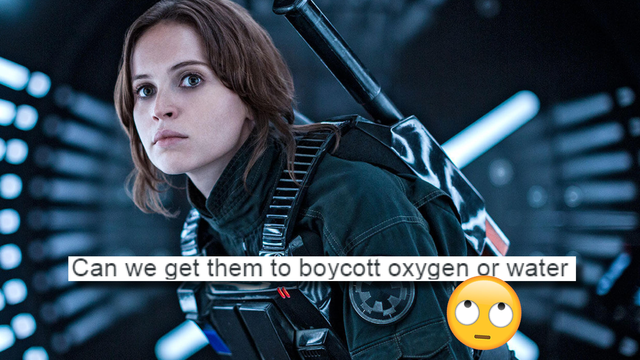 Ya'll need to drink a juice box and go to bed.

Art often imitates life. That is the case whether you're talking about ancient Greek tragedies or Harry Potter films. As our world spirals further into an unrecognizable hellscape, themes in fantasy films like the Star Wars are starting to seem more and more...plausible.

[Enter stage left: People who support a man with questionable ideology in 2016 and are upset that fascism is being portrayed in a negative light via the medium of film.]

If this year taught us anything, it's that you can basically type anything online and people will think it's true because no one has the power of discernment anymore.

Twitter user Jack Posobie is claiming (with zero evidence) that scenes from the upcoming Star Wars: Rogue One film were re-shot to include anti-Trump sentiment which is....unlikely.

I promise you this did not happen because NO ONE RE-SHOT A MOVIE TO MAKE FUN OF A GUY WHO DOESN'T NEED ADDITIONAL HELP LOOKING BAD. Contrary to everything that has happened this year, fascism is still widely considered a bad thing.

Bitter men of the internet (because who else, right?) are calling for fans to #DumpStarWars due to things looking a bit too familiar, if you know what I mean.

Writers of new Star Wars said people who vote for Trump support Hitler. If you still give them your money, shameful. #DumpStarWars

For some fans of Trump, it may seem like messages of anti-racism, anti-bigotry, and anti-misogyny are an attack on their dear leader, but you only need 1 brain cell to realize that the Star Wars film franchise has spent the better part of 40 years analogizing World War 2 and 20th-century fascism.

Love that it took racist idiots nearly 4 decades and a KKK-endorsed POTUS to figure out what Star Wars is about. #DumpStarWars

#DumpStarWars : Idiot Nazis not realizing that Star Wars has, since it began, been anti-fascist.

#DumpStarWars is hilarious bc it's not about some new revelation, just them right now suddenly getting that the bad guys represent Nazis

The most glaring example of Star Wars and WW2 parallels is the franchise's use of "Storm Troopers", etymologically modeled very clearly after Hitler's SA (Sturmabteilung), a paramilitary branch of the Nazi Party replaced by the SS.

World War 2 and the lessons we learned from it have influenced an entire generation of writers and film-makers (why do you think so many British shows have at least one episode where the protagonist tries to go back in time and kill Hitler?).

If a children's movie coming out in 2016 looks like propaganda against your candidate...well, the shoe might fit.