Stop feeding that beach monkey and get in the studio!

Dear Robyn Rihanna Fenty (or just Rihanna to the majority of the world),

I hope you receive this letter in good faith and that you are enjoying (or enjoyed, it's so hard to keep up) your holiday where you were feeding beach monkeys with a bottle. It looked like a lot of fun, and if the below photo is anything to go by it looks like you were having a great time. 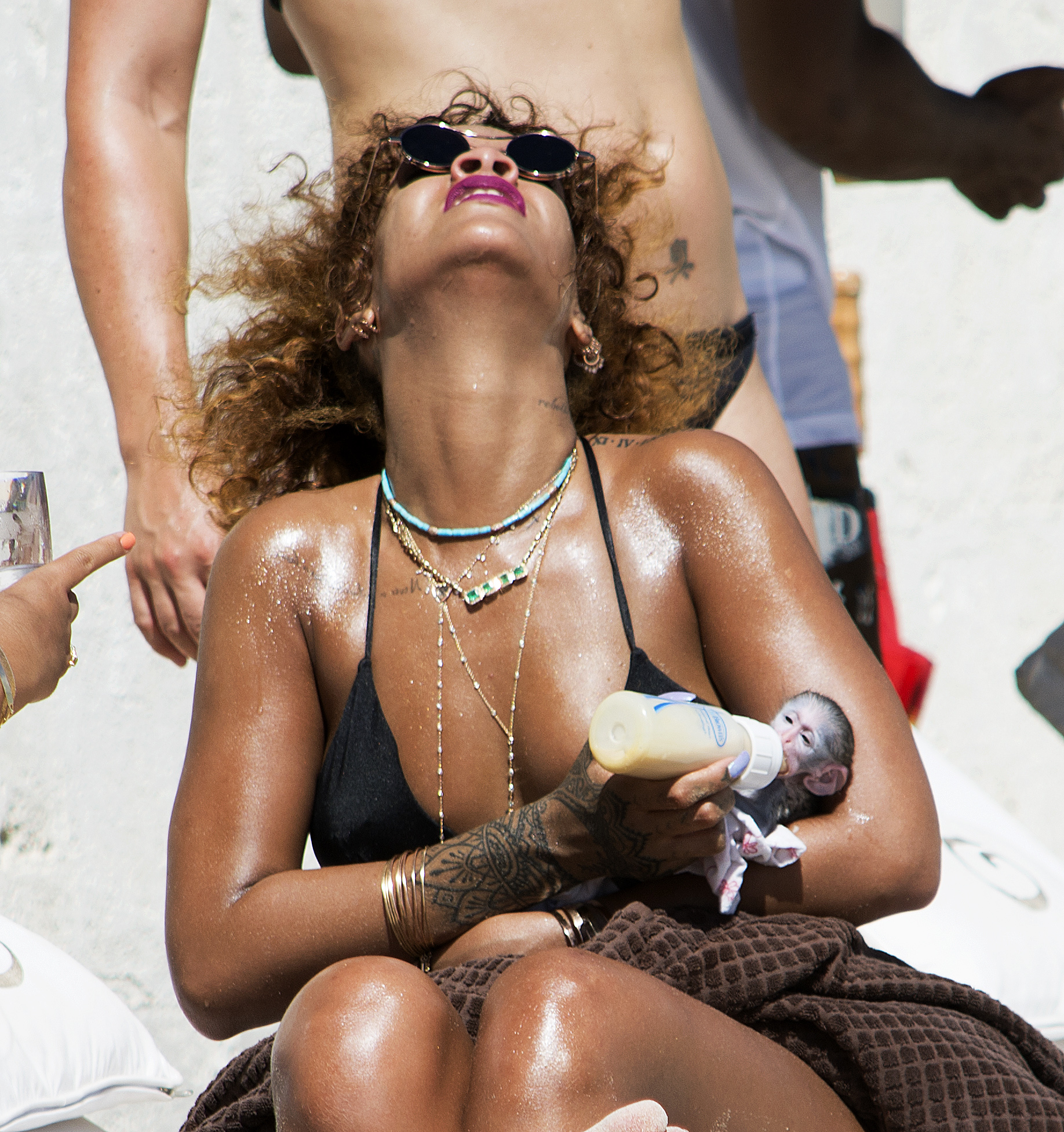 This really is a great photo

Anyway, let's get stuck into the reason as to why I'm writing to you.

It recently came to my attention, after reading this article on Billboard, that it's been over 1000 days since you last released an album (1002 if you're counting). That means that you haven't released a new full length record since 2012's slightly underwhelming Unapologetic.

I can remember a time a few years ago where a Rihanna album was like Christmas - you knew it was coming every year and you looked forward to it every year. You waited with baited breathe ahead of the inevitable X Factor performance; you were enthralled by how the lead single would essentially change pop forever; and you wondered which song on the album would be your "phuck u" anthem.

Yes, they might always have been a mixed bag (Talk That Talk, anyone!?), but it was a thrilling time and you were quickly becoming the biggest and best popstar on the planet.

I can quite clearly remember your imperial phase, which in my eyes was between 2010-2011. Those years saw such momentous tracks like "Only Girl In The World", "What's My Name", "Man Down" and, of course, "We Found Love" slay the charts, but also become modern musical canon. Following the darkness of Rated R, these subsequent albums proved that you were more than a pop puppet and that you could snatch Madonna's crown as pop's reigning chameleon.

By the time that Unapologetic came out, you had essentially released an album-a-year for seven years. This clearly showed as you became increasingly distant and the material suffered. Despite this, you still delivered what is, to me, the best televised performance of your career with "Diamonds" on X Factor.

As I mentioned, it felt right that you needed a bit of time off; recharge those creative juices, as it were.

So when Q4, the music industry's major part of the year spanning from September until December, came around last year, we were all waiting patiently for an album that you had teased, tentatively titled 'R8'.

Rumours were circulating that you could pull a Beyoncé and drop the whole thing with no fanfare, thus creating a hell of a lot of fanfare. However, as December rolled past, nothing emerged.

And then, at the end of January you unleashed the divisive "FourFiveSeconds" featuring Kanye West (yes) and Paul McCartney (no, lord no!).

Personally, this song does nothing for me. I get that you're experimenting sonically and I respect that, but I don't particularly want a Rihanna campfire song featuring a member of The Beatles who doesn't know when to retire.

Yes you gave us this incredible performance of the song at The Grammys (seriously hun, who knew you could SiNG like that?), but it was so unexpected and not necessarily what anyone was particularly asking for that it felt anticlimactic, even if it did do well on the charts.

It seemed, then, that 'R8' was on the horizon; what now seemed a distant memory was shaping up to be an actuality.

However, then the Home soundtrack came along, and I think the less we say about that the better, don't you?

With #BBHMM, it's obvious that you really like the song regardless what your fans think. The fact that you premiered it on f*cking Tidal can, this time, be forgiven. Regardless, something about it didn't click, even after this incredible performance. What happened here, bbz? You were decked out in the best outfit and slaying a routine for what? What was the point?

Rumours started to swirl that the original 'R8' concept had been scrapped, as you premiered the dirge-y "American Oxygen", a vain attempt at a politically charged song that ended up the messiest thing of your career.

The bit that gets me is the release of the "Bitch Better Have My Money" video, almost four months after the release of the song. While this video is definitely your best, and you've had a few brilliant videos may I add, it, again, seemed totally pointless. What is it working towards?

You could say, Fenty, that mine and most of your 'navy's' patience is wearing thin. Seriously, where the f*ck is 'R8'?

So, when I see you on holiday obviously enjoying yourself, feeding monkeys and having a lol at a carnival with Lewis Hamilton (?!), it does make me question your dedication to the whole thing. There was a time where you were so driven that you changed the game and everyone followed. Now it all seems a bit half-arsed and, to use the immortal words of Madonna, reductive.

The thing is, right, while 2015 has been a really strong year for music, pop is in need of a kick up the backside, the sort of kick that a few years ago you would have delivered and made us all question why this hadn't happened before. Could you surprise us all and do this again? I'm not too sure.

Believe me when I say this comes from a place of love, but (and I hate to say this) I'm disappointed. I think we expected more, and whether our expectations were warranted, or too demanding, is probably up to you to decide.

For now I'm hoping that you see sense. Put those baby monkeys down and go and make the album of your career.

I may be disenfranchised now, but I want you to do well and be the best you can be.

So, go and claim that title of the best popstar in the world. You held it once and I think you can hold it gain.

The kindest regards and my utmost respect.

P.s. Seriously, what a song.