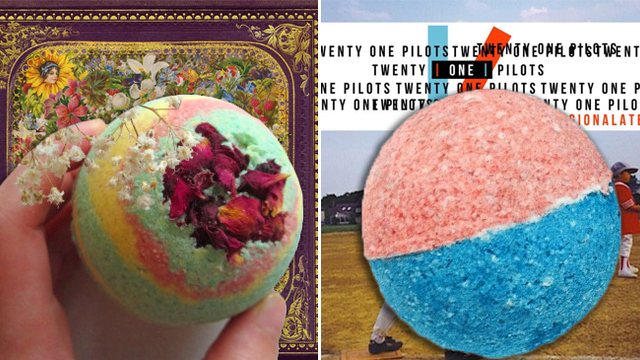 Get me to the bath ASAP!

Raise your hand if you love a bath bomb! Ever since we saw that pitch black bath bomb on Instagram we've been obsessed with anything and everything that we can fizz into our baths - especially if it matches our aesthetic. So imagine our joy when we came across a tumblr that makes bath bombs inspired by our favourite bands...

Someone has been making bath bombs inspired bands like Panic!, Twenty One Pilots and Fall Out Boy on Etsy and you're gonna want them ALL.

This is "Mad As Roses", inspired by Panic! At The Disco's Pretty. Odd. And there's even one called "Spices and Virtues", which leaves a sweet cinnamon scent on your skin - and a trace of golden glitter. There's the "Local Dreamer", inspired by the colour scheme of Twenty One Pilots. Or you could opt for "Truce", a relaxing calming chamomile bath bomb inspired by the song. The "The Black Parade" bath bomb fizzes to reveal a gorgeous deep red in your bath water. And there's one inspired by Marina's FROOT which is, you guessed it, a "bright and fruity celebration". And the outrageously yellow, citrus smelling "So Wrong, It's Bright" inspired by All Time Low. The bath bombs are all handmade using vegan, non animal-tested products and ingredients. Custom band bombs can also be created if you send over a few specifics.

The store is currently closed but they've returned a few times with a full restock of the insane bath bombs. Fingers crossed they come through in time for our next dip in the tub. *bookmarks Etsy shop just incase.*