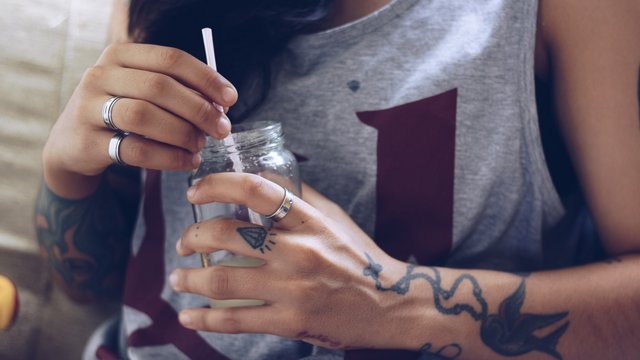 DIY tattoos are all the rage so here are the facts.

DIY culture isn't going anywhere, especially when it comes to art and style. While tattoo design trends come and go, the method of do-it-yourself tattooing known as "stick and poke" is gaining more mainstream traction with younger tattoo enthusiasts.

Before we dive into the "stick and poke" trend, we want to formally say that it's always advisable to seek permanent body art through a licensed professional.

So, what exactly are stick and poke tattoos?

Stick and poke describes a method of DIY tattooing that was mainly popular in native cultures around the world before slowly making its way into the mainstream. Some also refer to it as the hand poke method.

The "stick" part of "stick and poke" is constructed by attaching a needle to a pencil (or other rod-like apparatus) and using thread to create a makeshift tattoo gun. It's of course, hand operated so it won't have quite the same effect as a tattoo gun.

Do stick and poke tattoos hurt?

Like any tattoo, the level of pain depends on what part of your body that you're having done. Needle on bone hurts more than the fleshier parts of your body and we all have different pain thresholds. Saying that, you're having a needle poked into your skin. It is going to hurt.

Which famous people have stick and poke tattoos?

Many of the famous people with this style of tattoo are already big tattoo enthusiasts. Miley Cyrus, Rihanna, Kesha, Florence Welch, and Halsey all proudly rock stick and poke tattoos.

Halsey remarked that the tattoo on the back of her thigh was done with a sewing needle and a lot of vodka.

@Katarina__96 "FEROX" it means fierce in Latin and it was given to me with a sewing needle, India ink, and a lot of vodka.

Are stick and poke tattoos permanent?

Stick and poke tattoos are permanent but they do fade. You may get a DIY tattoo that you love but need to have a professional tattoo artist go over after a while. Quality of the ink and artist can also be variables in how quickly the tattoo fades. This one is a bit complex. People have been giving themselves these tattoos for centuries but, of course, there is a risk of skin infection and other complications. There should always be a concerted effort to use clean and sanitized tools and sanitary gloves even in a casual setting. Some ink can cause an allergic reaction so, if you know you have sensitive skin, you may want to explore other options.