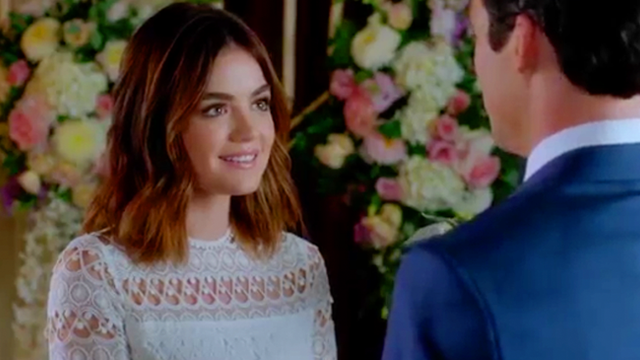 It's available to buy online.

Pretty Little Liars has been SERVING for years when it comes to on-screen wedding dresses. In fact, there might have been more wedding dresses on PLL over the past seven season than there has been on Say Yes To The Dress come to think of it and they did not disappoint in the final episode of the series.

In the finale, Aria had two wedding dresses because duh, of course she did. The first one, a long sleeve embroidered Victorian style number that everyone low-key HATED when Lucy Hale shared a promo pic of the episode on Instagram, was seen as Aria was preparing for her wedding with Ezra.

The one she FINALLY made it down with aisle in was a dress that can only be described as the most perfect Aria dress of all time despite being NOTHING like what we actually imagined her wedding dress to look like. Either way, everyone was obsessed with it - and so happy that she ditched the other one.

The only good thing that came out of this was Aria didn't have to wear that hideous wedding dress. #PLLEndGame #PLLGameOver pic.twitter.com/rh8iofFrP8

The dress in question is the 'Gem' dress by Alexis and is available online for a cool $568 (that's around £450 if you're from the UK).

Aria's chilled out bridal lewk (she wore lace up white ankle booties with it) is actually perfect for a prom or just as a cute holiday outfit. In fact, you could probably pick up a pretty similar one in H&M for a lot less.

Honestly though, she could have got married in a bin bag and we still would have stanned. #EzriaForever