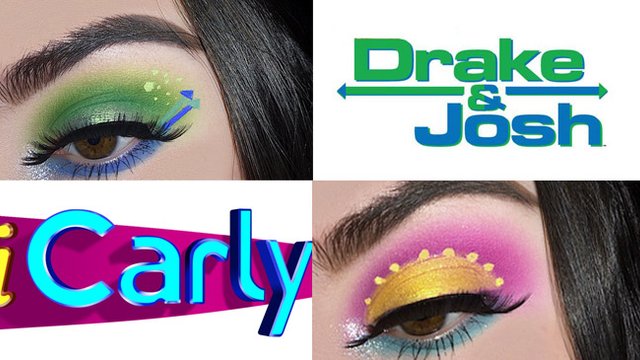 From 'Hannah Montana' to 'Wizards Of Waverly Place' and 'Fairly Oddparents', 18 year old Gabi Greer is making looks based on all your childhood faves.

Alert all Nickelodeon and Disney kids - the makeup look of your dreams has arrived!

Gabi Greer, an 18 year old from Washington State, has posted some seriously nostalgic homemade looks to her Instagram and Twitter this week that have got 90s and 00s cartoon fans seriously hyped.

First up, there are these iconic pieces featuring Fairly Oddparents, complete with crown, as well as Kim Possible and Lizzie McGuire themed colouring:

Next up, Gabi has gone all out Disney with some shades that Miley, Raven and Selena would all be proud to wear:

How about a Drake & Josh look? Or, if you are still not over the whole wedding feud, you can always go with Zoey or Carly:

Finally, there's this mix of Avatar The Last Airbender, Danny Phantom and, our personal fave, The Proud Family:

Just excellent work all round really isn't it?

And, safe to say, Gabi has made a lot of cartoon fans very happy with her work, giving them some serious inspo themselves:

I wish I was talented like you, these looks are soooo amazing - in love with them all!!!!

this is so amazing omg pic.twitter.com/06jJXkY5R3

Her original tweet has now been liked over 200,000 times. Nice work girl!

Wanna try out a look for yourself? Gabi has put all the details of how to recreate all the pics above on her Instagram page which you can check out here.