This Teen Let Her BFF Design Her First Tattoo And OMG, She F*cked Up Big Time 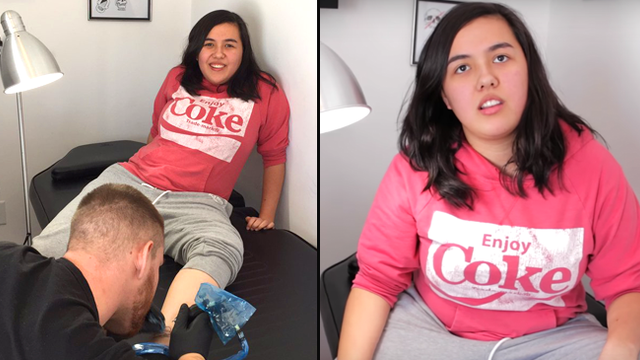 "HE PUT HIS F*CKING HANDLE ON ME"

Question for you all: Do you actually have a level of trust so high that you would let your bestie decide what gets permanently inked on your skin? If this teen's experience is anything to go by, the answer to that question should be a solid NO.

YouTuber Elle Mills decided to let her best friend Tavian Palacios choose her very first tattoo. Now, being her best friend, you would think that Tavian would know Elle inside out and make his decision based on her best interests. Something small, something meaningful, something that is no way, shape or form a JOKE.

She was wrong. Elle went ahead with the tattoo that Tavian had chosen for her but it wasn't until AFTER the tattoo had been finished that Elle looked down to find that he had chosen HIS OWN TWITTER HANDLE to ink on her skin forever.

i told my friend to surprise me and choose my first tattoo aND HE PUT HIS FUCKING HANDLE ON ME pic.twitter.com/EKSxNKzEzt

What. a. nightmare. His response? "Elle, you know I need the followers." Yeah, Elle... take one for the team, jeez! Watch the traumatic ordeal below:

Tag yourself. I'm the friend who had to leave the room.

Later, Elle told Buzzfeed News that she didn't regret the tattoo because that's the type of friendship that her and Tavian have - which is nice, we suppose. To be honest, she was lucky that his @ handle was just his name. It could have been much MUCH worse...