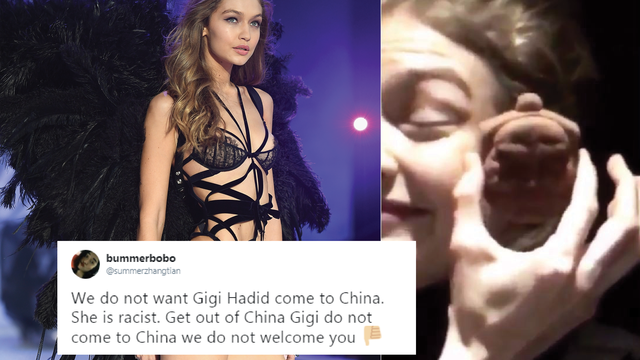 The model is supposed to go to China for the Victoria's Secret Fashion Show.

It's official. Gigi Hadid is slated to hit the Victoria's Secret runway again this year. This time, the social star and model is headed to Shanghai, China and the news is already causing some controversy.

"Forever and ever and ever a dream come true to be asked back to the VS Show," Gigi wrote on her Instagram after the news was confirmed.

The 22-year-old is facing some backlash from Chinese audiences who have yet to forgive the star for a racially insensitive incident that took place earlier this year.

Gigi got into some hot water in February of this year after a video depicting her "mocking" Asian people went viral.

this is y'all woke palestine queen? Gigi out here mocking Asian people. i would say she's cancelled but she never started. rat @GiGiHadid pic.twitter.com/b6wj5k1sXE

The incident was viewed as culturally insensitive but the star never apologized or publically spoken about the controversy. Now, she is headed to China for the annual VS Fashion Show and many Asian fashion fans are urging her to stay home.

Zayn Malik defended Gigi at the time, saying she could not be racist against Asian people because they are dating and he is of south Asian descent. The controversy passed but Gigi's failure to apologize or address the video has brought the incident back into the forefront of people's minds.

Gigi has since disabled comments under her post about returning to the VS runway. The video was a huge misstep for the star but Gigi will likely have to address the controversy before she jets off to Shanghai for the show.