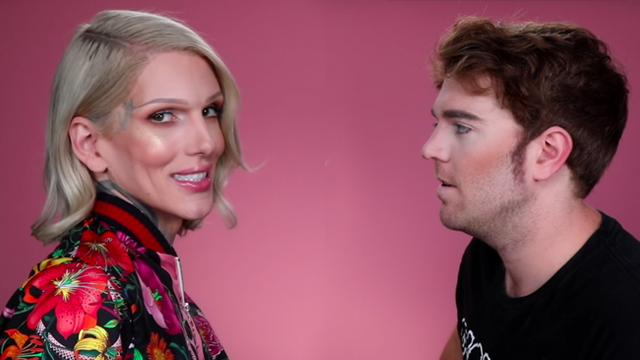 If I have to live with this information, so do you.

We've seen of a lot of truly wild contouring tricks in our time on the internet. People contouring their legs, their lips, their fingers (yes really) people will contour ANYTHING. That being said, the last thing we thought we'd discover today is that there are people out there who know zero bounds when it comes to contouring.

And one of those people is contouring expert Jeffree Star.

Jeffree sat down with Shane Dawson in his latest video and beat his face for the gawds but not before admitting to contouring one particular part of his body and honestly, it's wild.

Jeffree Star contours his penis. Yeah, seriously. In the video, Shane asks him whether or not he puts "make up on his penis for fun," and his reply? "Yeah, I contour my shaft a lot."

Whaaaaat? How does that even work tho? He goes on to explain how exactly he does it and honestly, it sounds like a LOT of work. But anyway, you learn something new everyday, we had no idea that was a thing but to be honest, we should have seen this kind of incredible revelation on the horizon after clicking play on a collab between Jeffree and Shane Dawson. On that note, go forth and contour whatever you damn well please.