A European apparel company has found itself embroiled in controversy after an attempt to "reclaim" the swastika sparked massive outrage. KA Designs took to their Facebook page to declare that "the swastika was coming back", 72 years after the end of World War II and one of the most horrifying atrocities in human history.

The brand shared messages that encouraged customers to view the swastika as a symbol of "peace" and "love".

The brand cited the history of the symbol, saying that the swastika is 5,000 years old and once symbolized good fortune in the Hindu and Buddhist religions.

People immediately shut that down, explaining that, post WWII, the symbol is still used to incite fear and hatred and that there is no point in trying to "reclaim" something with such a horrible history.

People soon began calling for a boycott of Teespring after the rainbow swastika designs showed up on their site. 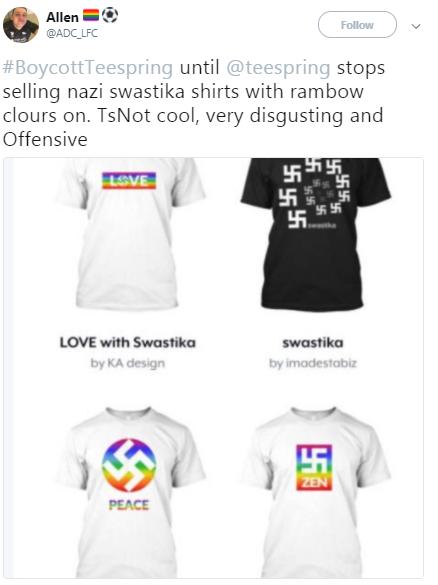 In an email to Mic, KA Designs said, "we really enjoy the swastika. Not because of any of the meanings associated with it, but because of the shape and of how it looks."

The team went on to say that they did not agree with Nazi ideology but "wouldn't care" if actual Nazis purchased their clothing. This is deeply disturbing, as there are Neo-Nazis walking around in 2017 who could buy and wear this clothing to scare and intimidate others.

Decontextualizing something and saying you want to "reclaim" its original meaning doesn't erase the history associated with the symbol. History matters and context matters. No one gets to unilaterally declare the symbol's place in history as suddenly irrelevant. No one should be trying to "reclaim" this symbol. We should be working hard to ensure that the ideologies associated with it never get a chance to cause harm again.

Teespring appears to have removed KA Designs' apparel from its site after receiving complaints from users.