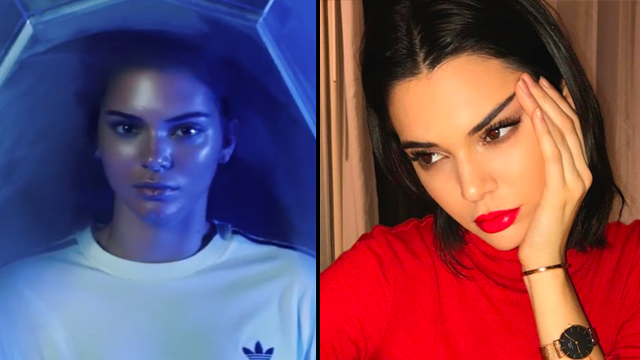 She's being haunted by a can of Pepsi...

Question: Will the internet ever let Kendall Jenner live? Answer: Maybe in the distant future but not today, Satan. Not today.

Yes, Twitter at large is fuming at Kenny J once again over her brand new campaign for sportswear giant Adidas. The latest version of the 'Original Is Never Finished' campaign - which has previously featured visionaries from the worlds of music, art, skate and sport - is set to a creepy remix of Frank Sinatra's My Way.

The video features Kendall being "reborn" in one of those pod things from that Jennifer Lawrence movie "Passengers" while speaking along to the lyrics of "My Way". People are pissed off at the entire thing for two reasons but are they actually fair criticisms to make?

Reason one: People on Twitter are annoyed at the brand for using Kendall as a spokesperson after the catastrophic backlash against Pepsi. It seems that people haven't quite forgiven her (or forgotten about) the tone-deaf protest campaign and they're threatening to boycott the brand if they continue to use Kendall in their promos. Nightmare.

Not really feeling Kendall Jenner for Adidas tbh. It's gonna take more than a can of Pepsi to change my mind

It's crazy how Kendall just fucked up pepsi and then Adidas just turns around and makes her the face of their brand. Something isn't right.

Reason two: Even MORE people are pissed off at Adidas for featuring Kendall, non-athlete and known privileged human, in their campaign that celebrates originality. Fans of the brand argued that there was nothing original about Kendall in the first place and that they should have used an athlete, who actually had overcome adversity and struggle to achieve global success, to take her place instead.

Kendall Jenner???? Really?!??? There is NOTHING original about having this ridiculous image front your brand...come on adidas!! Do better!!

Someone explain to me why Kendall's the new adidas ambassador when there's no shortage of ACTUAL ATHLETES in the world?

While the 'Pepsi' association with Kendall is understandably still pissing people off, the whole "she's not an athlete" argument is a little weak considering the other artists featured in the video. Sports brands have never exclusively used athletes to model or even design their clothing - Puma and Rihanna, Adidas and Kanye, Gigi and Reebok anyone? And technically, the line of clothing Kendall is modelling is streetwear and not performance wear.

While the vast majority of comments online were negative, tons of fans and supporters of the brand loved the video and are obsessed with the aesthetics of the campaign. The brand also defended their decision to place Kendall in the ad with a statement issued to The Insider: