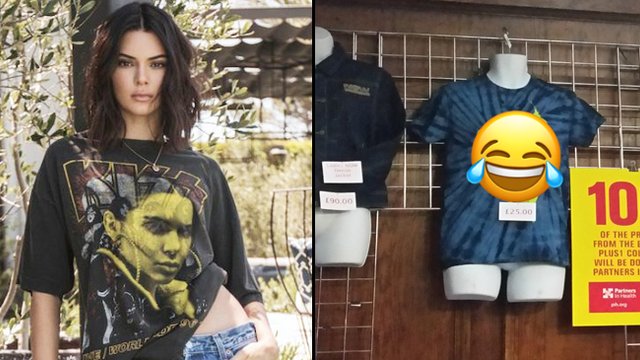 One act has clearly seen the funny side of the Jenner sisters' recent clothing controversy, adding their faces directly onto their merch stand.

The latest twist in the Kendall and Kylie Jenner t-shirt saga has seen one enterprising band make their very own versions of the controversial tops to sell on their merch stand.

As we previously reported, the sisters were forced to apologize after releasing a line of shirts featuring their faces imposed over the logos and images of classic bands like The Doors, Led Zeppelin, Metallica and KISS and hip hop legends Tupac and Notorious BIG. The items were being sold for £125 each and the pair even received a cease and desist letter on behalf of The Doors.

But now, the band Arcade Fire have been spotted selling a similar line of shirts at their recent London show (July 4th), featuring a stencil of Kendall Jenner's face with the logo for their new album Everything Now emblazoned on top.

So @arcadefire are selling their own versions of *those* Kendal and Kylie Jenner t-shirts pic.twitter.com/vTrKrDJPxp

No word yet on how the Kendall sisters have reacted but, hey, at least at just £25 they are significantly cheaper than the original model.

Arcade Fire aren't the first band to have a laugh at the whole fiasco, Pete Wentz having previously tweeted out the below image although, as far as we know, you can't actually purchase it anywhere. Yet...