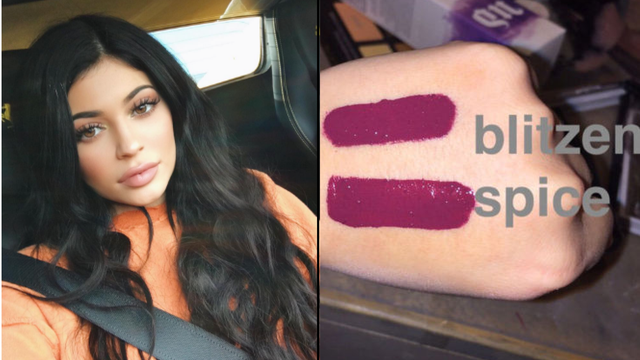 They do look remarkably similar....

Kylie Jenner Lip Kits have been a consistent success since their first release in November, 2015. Of course, her cosmetics have faced their fair share of controversies from fake product being sold on shady sites as the real deal, to being accused of "copying" other brands.

Now, Kylie will have to answer to a different kind of controversy as customers allege colours are being re-sold under different names to make more money.

Kylie Cosmetics has been repackaging their general line lipsticks and making them limited edition. Example: spice and blitzen pic.twitter.com/VbVNqfahFs

Here's why customers are so angry.

First of all, the individual liquid lipsticks are expensive. Fans frequently post about NYX and Colorpop dupes that are the exact same quality and colour but cost 5 times less. People who buy lip kits know there are cheaper dupes. But, because they trust Kylie's brand, they overlook that.

Fans think they bought a "limited edition" colour that had previously shown up with a different name and slightly different packaging.

@KylieJenner why does Blitzen look exactly like Spice? Asking for a friend

the description for spice is a deepened raspberry-plum, and Blitzen is apparently a warmer version of that @KylieJenner please explain HOW pic.twitter.com/NUEoqlC7SD

In this case, if you bought the 4 piece holiday set and then the standalone "KYLIE Spice", you'd be paying over $75 for six products. Two of them remarkably similar.

Believe it or not, there are people who buy every single lip kit as soon as it drops. So, this will be especially disappointing to them.

There may be a perfectly logical explanation why the colours are so similar but Kylie has yet to speak publically about the allegations.