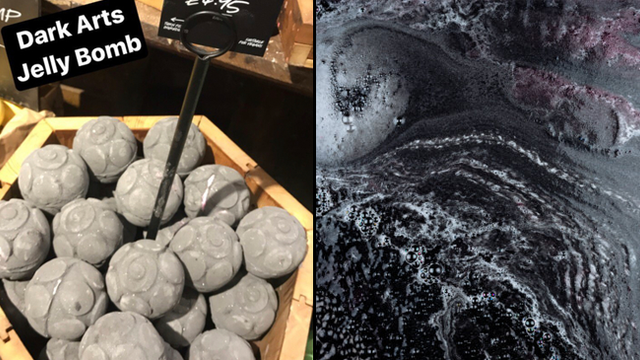 "Slyther-in to a hot bath and cast this spicy bomb into the water."

On a scale 1-10, how much you love bath bombs? You know, the standard 'drop em in the bath and watch 'em go' bath bombs? A lot right? Well you're going to be OBSESSED with Lush's new invention...

Lush just released a brand new line of 'jelly bath bombs'. They're exactly the same your standard bath bomb in terms of fizzing and whizzing round your bath tub but these new creations release a gooey thick jelly that softens and smooths your skin.

There's four different versions to choose from, a green one, a yellow one, a blue one... and - wait for it - an actual Harry Potter themed black one. No, we're not joking. It actually exists and it's available to buy in the UK right now.

The 'Dark Arts' bath bomb contains cinnamon leaf oil, almond oils and zesty Brazilian orange oils and gives off a spicy scent once you drop into your bath. Once the bomb has dissolves, it transfigures into pink jelly like foam on the surface of the water. Potions master Snape is SHOOK!

A black jelly bomb? They are shooting some exciting content in Jack's lab today featuring the new range that is coming to the shops on Friday! by @doubtfulsound #JellyBomb #BathTime #LushCosmetics

It looks like it could be Lush's blackest bath bomb too - even darker and moodier than the fan favourite Metamorphosis.

The Dark Arts Jelly Bomb is available to buy online and in store now. Race you to the third floor bathroom.