People Are FUMING Over This MUA's Blackface "#Slave" Makeup Tutorial

An Instanbul-based makeup artist is catching some serious heat online after posting a photo of herself in blackface and calling it her "black beauty transformation". 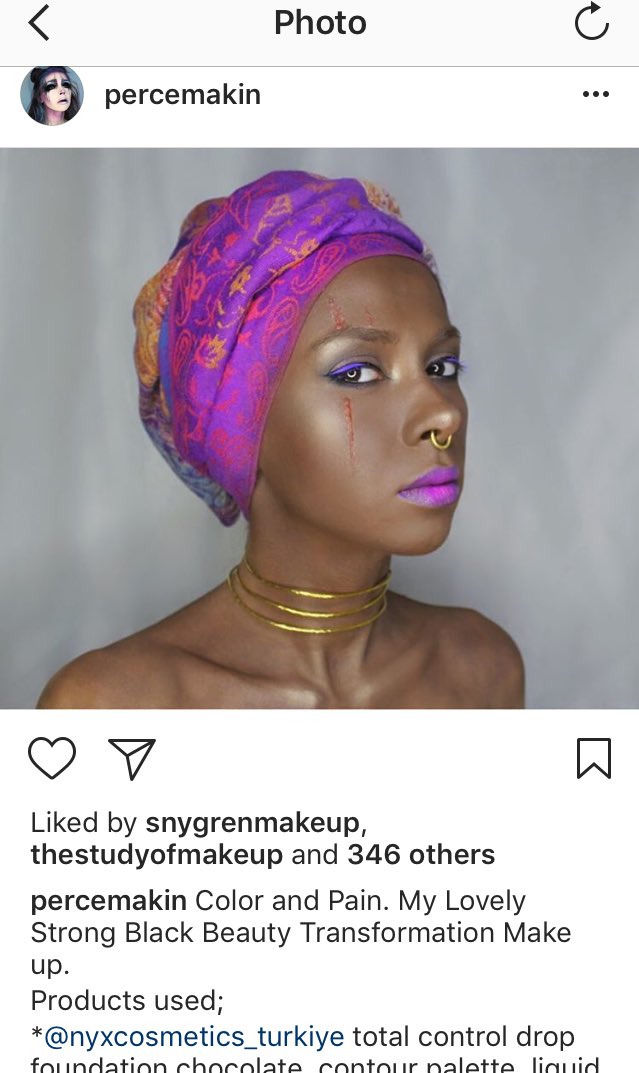 Percem Akin posted a photo (and a now-deleted YouTube video) of herself wearing dark makeup, facial scars, and a headscarf to complete a very specific "look".

Say it with me, guys. "Blackface is NOT okay--especially not in 20-freaking-17".

The layers of insensitivity have not been lost on the internet masses. Many have noted that the MUA used the hashtag "slave" in the Instagram photo's description.

DONT SUPPORT PERCEMAKIN ON INSTAGRAM CAUSE THEY THINK BLACKFACE AND HASHTAGGING SLAVE IS OKAY
So why u private now, sis?
Just wanna talk pic.twitter.com/XBq8fnbQIz

LOOK AT THE TAGS "slave" appears twice, what do you think about the white nyx face awards winner doing this @jackieaina pic.twitter.com/rwWwQjpru2

But forreal report this account on Instagram cause she's still out there proudly displaying blackface and "slave" makeup pic.twitter.com/1wXR97OhTu

We're hoping Percem realises that slaves weren't too concerned about whether their eyebrows were filled in before going out to do free labour for their oppressors. Slavery is a traumatic cultural stain on our history, the implications of which are still felt today. Playing dress up and glamorising being "owned" as property is never okay.

Percem told the Independent that the whole situation is a misunderstanding.

"This is just a movie character, and the movie which is directed by some poor students in my country, Turkey."

"We are not living in America or Africa, in my country finding a black model is so difficult, and they (directors) created a character for this movie and I made this."

Percem has made her Instagram private following the backlash, but her YouTube channel showcasing her special effects work remains active.