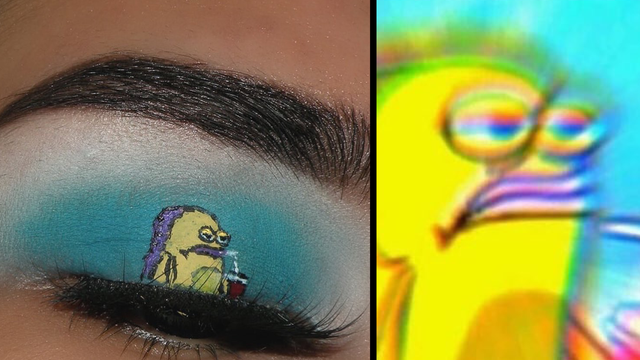 When you love makeup and memes too.

Raise your hand if you love makeup. Keep your hand up if you also love...memes. If your hand is still up, get ready for a wild ride. We've finally made it to the cross-section of makeup and memes so everyone hold tight because there's no turning this ship around.

when you mess up your eyeliner (inspo tagged) #makeup #meme pic.twitter.com/QN8U13H47e

This belongs in the museum of modern art.

I don't know who started this spongebob makeup meme trend but I really love it pic.twitter.com/xstieT0h6N

Everytime I close my eyes I see this.

This is so pure.

The reaction to meme makeup has been...mixed.

So the makeup meme trend is actually hilarious

anyway, at this point i'm convinced Twitter doesn't care about unconventional artistry - it cares about meme makeup and trends of the week pic.twitter.com/WYpRF9adfv

We have finally reached peak makeup. There is nowhere to go from here. These heights are...dizzying.