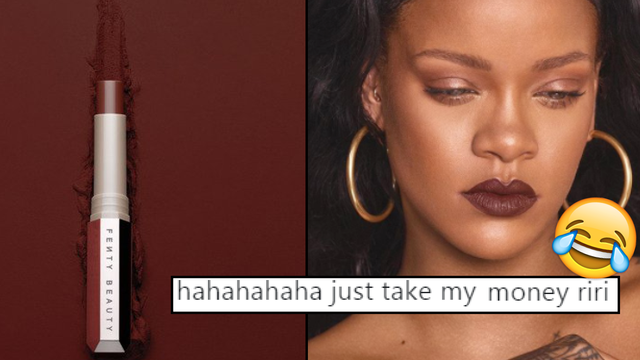 Rihanna turned your least favourite thing into a lipstick name and, honestly, we stan.

PMS sucks. There is nothing nice about sore boobs, achy muscles, bloating, or acne. That being said, Rihanna has a new lip shade called "PMS" and everyone thinks it's a GENIUS name.

Rihanna announced that a broody lip shade called "PMS" is coming to Fenty beauty on Dec. 26.

The shade is a gorgeous deep chocolate colour. Pair the iconic colour with its provocative name and people were BOUND to be obsessed.

People even thought it could present a learning opportunity for dudes.

i can't believe it took rihanna to name a shade PMS for these men out here to learn wtf it is...a legend in our community

Either way, the internet straight up knew they wanted PMS ASAP

Thanks to @rihanna I just said the phrase "I want PMS" for I hope the only time in my life. #FentyBeauty

Leave it to Rihanna to turn the bane of your existence into an iconic lip shade.