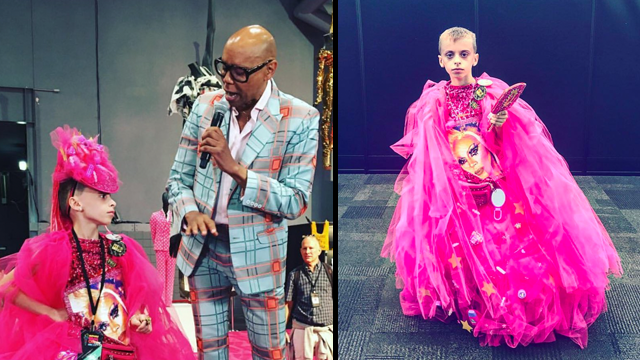 The NYC gathering of all thing drag even included a kids' runway that, needless to say, was actually incredible.

Ru Paul's gathering of all things fabulous, Drag Con, finally hit the East Coast of America this past weekend (September 9th and 10th) with a two-day extravaganza in New York City's Javit Center.

Described as "the first convention that celebrates the art of drag, queer culture, & self-expression for all!", the event had panels, meet and greet sessions and, most importantly, a LOT of amazing outfits.

But perhaps most impressive of all were the huge amount of young kids who showed up in their finest clothing, ready to party and express themeselves. RuPaul himself has been tweeting some of his fave images while others shared their iconic looks on Twitter using #dragcon.

So, here are just a few of our fave youngsters who came to slay at Drag Con:

Lana had a blast at @RuPaulsDragCon @michellevisage @RuPaul @WorldOfWonder thanks for a weekend where kids can enjoy drag too pic.twitter.com/ekUK0ceNpW

OH HONEY! @trixiemattel is having the time of her life at #DragCon NYC! pic.twitter.com/y8Pwb8sIZS

Plus, Desmond the baby drag queen, who is just 10 years old, was selected by Ru himself to help open the festivities and cut the pink ribbon:

And it gets even better as Desmond also hosted a children's runway on Sunday morning which saw the kids of the convention serve up some serious looks:

Bring it to the runway, children! #Dragcon NYC

Well done everyone - you are the future queens!

Now, when are we gonna get a kids version of the show? Come on Ru, sort it out! You know it would be sickening.