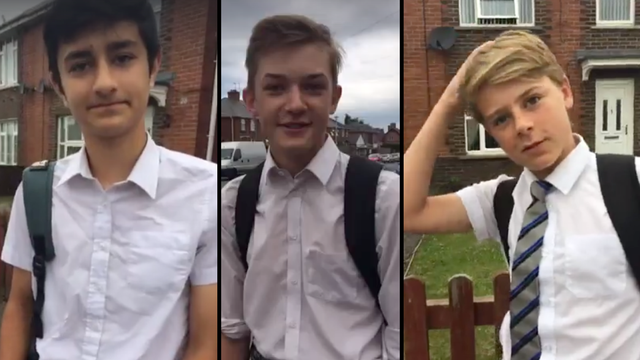 A large group of boys at this school put on skirts and it was so wholesome.

Summer is an uncomfortable time for everyone. It's hot, sweaty, and taking public transportation anywhere somehow gets 300x worse. Britain especially is experiencing record high temperatures this year, but many workplaces and schools have still banned shorts for its male staff members and students.

A group of teenage boys at Isca academy in Exeter, England arrived to school wearing skirts when their headteacher reportedly refused to allow male students to wear shorts. Devon Live News got interviews with some of the students who were all planning to arrive on campus together.

A year 9 student wearing a skirt today commented that the protest of sorts started out as five students but turned into "hundreds" (which may be a slight overstatement, but we take his point). Another organiser of the skirt-in gave a more conservative estimate of 50-75 boys who planned on taking part.

None of the students seemed fazed by their new foray into skirts. Some commented that they enjoyed the breeze, while another called the experience of wearing a skirt "refreshing".

The boys say they were told they would be excluded from class if they wore shorts, so the skirts were a way around an unfair rule that completely ignores dire weather conditions.

Everything about this is so pure and we honestly can't deal. Good on the boys for finding a creative solution to their problem and not buying into any toxic masculinity that says they can't wear what they want.

Record heat or not, we are ready for boys confidently wearing skirts to become mainstream af.