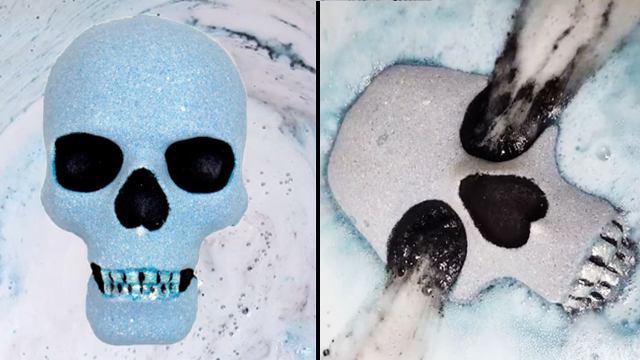 Tonight, we bathe in hell.

And if you're obsessed with everything that's just been listed above, you're going to lose your mind when you see this Skull bath bomb from California based cosmetics company, Harper Homemade.

The bath bomb itself is vegan, cruelty free and hand made. Oh, and it smells like mixed berries - just because we love death and misery, doesn't mean we can't smell nice at the same time. The "Poser" bath bomb doesn't ~quite~ turn your water pure black but it does turn everything in to a dreamy shade of blue.

But the best bit? As soon as it hits the water, the black eye sockets start bleeding out into the water and it looks AMAZING.

(There's a lot of skull bath bombs out there but do they look as satisfyingly morbid as this one? Nooope.)

The bath bomb has been SO popular that is has currently sold out but there will be a restock on March 1. The date all your nightmares come true.

Getting ready for March 1st!! Stocking up so we have quick shipping Also, everyone's orders have shipped!!