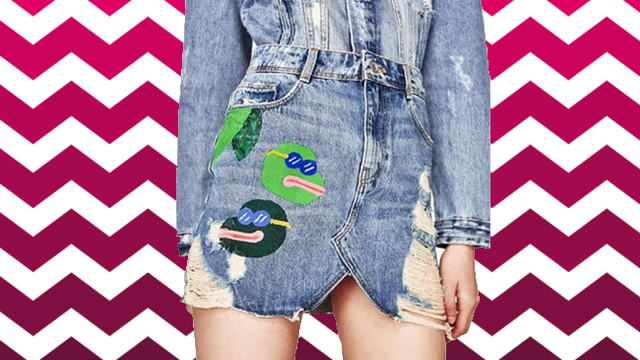 Everyone: Memes on clothing? Sign me the f*ck up! Zara: Interesting - it seems as though the kids are really loving those 'me-mes' these days... *googles memes* *two weeks later* Here, have Pepe the Frog on a cute denim skirt! Everyone again: Zara, u ok hun?

Fashion brand Zara has been forced to pull a denim skirt from stores after the internet exploded over a familiar looking green frog that had been emblazoned on the front of it.

Originally, King of memes Pepe the Frog had no connotations to anything anti-semitic or racist but recently, he has been commandeered as a symbol for the by the alt-right movement in the US and has been recently declared a hate symbol by the Anti-defamation league.

Many are now calling out the brand for neglecting to realise the racist connotations that Pepe now carries...

Just googled "Zara Pepe the Frog skirt", because this website and 2017 are bad

@ZARA you do realize that Pepe The Frog was deemed a hate symbol by the anti-defamation league? Just letting you know. pic.twitter.com/wVEwS3xQZR

While others are sitting back wondering what the f*ck is going on.

What was the problem with Zara having Pepe on that skirt? I thought Pepe was just a meme?

This is not the first time Zara has been called out and dragged in the media for tacking some offensive patches on their clothing either. Back in 2007, they had to remove a product that featured a swastika and they were called out for selling a blue and white striped shirt with a yellow star because it bore a striking resemblance to that worn by victims of the Holocaust.

But then again... this could all be a misunderstanding. Maybe Zara weren't trying to be cool with memes. Maybe they were just trying to low-key steal the likeness of Old Man Jenkins from Spongebob?

Tbh I don't know how everyone see's pepe @ZARA pic.twitter.com/BD0GFQoaom

Zara has responded to the controversy. A spokesperson told Vogue: "The designer of the skirt is Mario de Santiago, known online as Yimeisgreat. Mario explores social interactions through his work and in his own words: 'The idea came from a wall painting I drew with friends four years ago.' There is absolutely no link to the suggested theme."