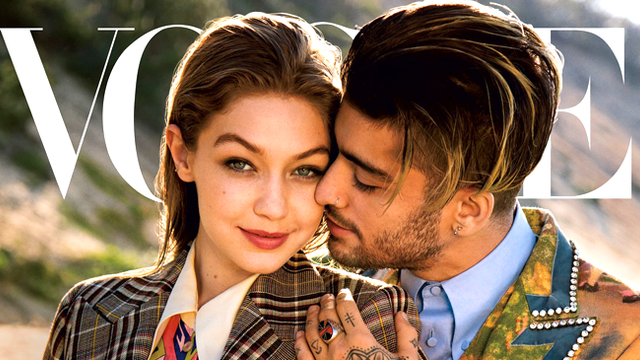 Gigi Hadid and Zayn Malik aka the world's most perfectly dressed, immaculately styled and disgustingly gorgeous couple are currently gracing the cover of the Vogue's August edition but they've been facing a bit of backlash for their cover story that focuses on fashion and gender-fluidity.

While many were praising the magazine for putting a half-Palestinian woman (Gigi) and a muslim man (Zayn) together on the cover, everyone else was pissed off because it sounds like Vogue have just declared Zigi as some kind of gender-fluid icons.

The full story is about a new generation of teens and young adults who are embracing gender fluidity through fashion. Part of the feature includes Gigi and Zayn, at home with Gigi's brother Anwar Hadid talking about the way they defy "gender codes" by wearing each others clothes.

"This new blasé attitude toward gender codes marks a radical break. Consider the scene one recent morning out in Montauk, New York, where the photos accompanying this story were shot: Gigi Hadid and Zayn Malik snuggle in interchangeable tracksuits as, nearby, Hadid’s younger brother, Anwar, rocks back and forth on a tire swing, his sheer lace top exposing scattered tattoos. For these millennials, at least, descriptives like boy or girl rank pretty low on the list of important qualities—and the way they dress reflects that."

“I shop in your closet all the time, don’t I?” Hadid, 22, flicks a lock of dyed-green hair out of her boyfriend’s eyes as she poses the question.

Hadid nods vigorously. “Totally. It’s not about gender. It’s about, like, shapes. And what feels good on you that day. And anyway, it’s fun to experiment. . . .”

Gender fluidity by definition refers to someone who doesn't always identify as one of the binary genders eg. male or female. Just because you swap clothes with your boyfriend doesn't necessarily mean that you are gender-fluid.

But as you can imagine, the choice that Vogue made to present their "gender-fluid" story using two cis-gendered, straight people as revolutionaries of gender norms didn't sit well with the internet and they are calling them out on it.

Wait. Gender fluid doesn't mean posing in a built-for-curves blazer with full hair and makeup, and a cis heteronormative boyfriend?

Think Vogue is a bit confused on what gender fluidity is! Wearing your gf's T-shirt does not make you gender fluid https://t.co/5yvh8FmUky pic.twitter.com/yPADJDwvPV

whenever I think about gender fluidity the first thing that comes to mind is definitely "straight cis couple" pic.twitter.com/9Vl5emomoq

straight cis couple shares clothes, Vogue declares them gender fluid. Teen Vogue is gonna have to clean this one up for Mama Vogue. pic.twitter.com/0VdVKadBbq

I know right! And all Z & G say is that they borrow each other's clothes. Such a big jump for the mag to declare gender fluidity

Another person featured in the article is Tyler Ford, an agender poet and activist, who responded to the article with a tweet about the lack of trans representation throughout the piece.

the only mention of the word "trans" in this article on "gender fluidity" is by me via interview.  https://t.co/27wSCkVXJ4

What do you think? Were Vogue right in their decision to herald Zigi icons of the gender-fluid movement or is the internet right to be a little pissed off at this reach?

School of Rock's Frankie and Marta are dating in real life

Emma Watson shuts down speculation that her career is "dormant"