YouTube is celebrated in many circles as an evolving hive for new forms of media, and home to some of the world's rising stars. In other circles, it's known as nothing but a wretched hive of scum and villainy. The difference between the two opinions lies in the comments.

YouTube comments are lauded as some of the worst on the entire internet. Bigotry is abound, personalities clash constantly, and practically nobody can spell. Not to mention that YouTube's ridiculous algorithm puts the most engaged (usually the 'most controversial') comments at the top.

But still, as is the case with most internet trolling, there's always a predictable pattern with many of them. Here's some of our least favourite types of comments; we're sure you'll find them VERY familiar.

Because really, where else would we start? 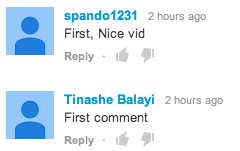 My heart bleeds for the guy who made the mistake of wasting time writing a compliment, only to end up a measly second.

Despite the fact that comments on freshly-posted uploads of popular channels will be buried within seconds, people are STILL trying in vain to reach that instantly validating goal of First Comment On The Video.

How you think you look:

How you really look:

It means nothing. It achieves nothing. It annoys the creator who is looking for positive feedback. And yet, after ten years of YouTube, it is still one of the most prevalent comment forms alive.

Here's a fact about your successful YouTube faves: they all got to where they are by taking different paths. Collaboration with other YouTubers? Definitely. Making great content? Sure! Buying views? Some, but we're not naming names.

But, literally none of them got to the place they are by asking people to look at their channel in other people's video comments. And yet this unique form of e-begging is rife across the comments of any and all successful channels. It's like the internet equivalent of selling your mixtape on the street.

Most get immediately flagged as Spam, but then some are smart and make it look like the comment is popular.

But seriously folks. Time passes. YouTube is only ten years old (and the video this comment was on has been up for five); the prescription on your nostalgia goggles is just not that high yet.

Maybe instead or reaching for thumbs-ups, go bury a cassette in the ground and really mess with people from the future.

95% of YouTube content is purely watched by people procrastinating or wasting time. But some people might not enjoy a video as much as they expected, then feel as though it's the uploader's fault that they have wasted their own time WRONGLY. And so, a comment such as this is born.

The reality is that people like this usually decide in the first 20 seconds whether or not they like the video, then lie about how much they watched. It's all just one big cry for help.

Quick anatomy lesson for you, and try not to faint when you hear this: Some women have breasts.

Additionally, some women might appear in YouTube videos. So there's a slight possibility that their (very clothed) boobs probably will too. And when all these variables all line up, there's a guarantee that there will be at least one dweeb who must, absolutely MUST fulfil their civic duty of informing you that:

Nothing gets past this breed of genius. Absolutely nothing.

Reddit, while a great site for discovering new content and shared interests, has also bred a reputation for being full of trolls. The "fedora-wearing atheist neckbeard" stereotype is often parodied, but none in a more annoying capacity than the fake YouTube comments that plague the top of every viral video. Because sadly, not enough people are aware of this "meta-trolling", so the resulting enormous backlash always puts them in the Top Comments (solid algorithm work there, Google).

Luckily Chrome, Firefox and Opera users can hide them with a nifty extension called "Hide Fedora". Seriously, it got THAT BAD.

7) The "Everything is Illuminati":

YouTube does have its fun little pockets of tinhat conspiracy theorists, but every now and then they leak out into the rest of the site. Like this guy below, who believes Lady Gaga's "Telephone" is proof of her affiliation with the Illuminati, Satanists and just about every other secret evil order. Read on if you dare.

Is it just me or did everything he say make perfect sense?

Keep an eye out for his next piece on why he thinks Benedict Cumberbatch is secretly a Lizard Person. Well, we say "secretly"...

Fall Out Boy Keep Hijacking Viral Videos And It's Hilarious