Fans Think "AHS: Cult" Dropped A HUGE Hint For Next Season In That Final Scene 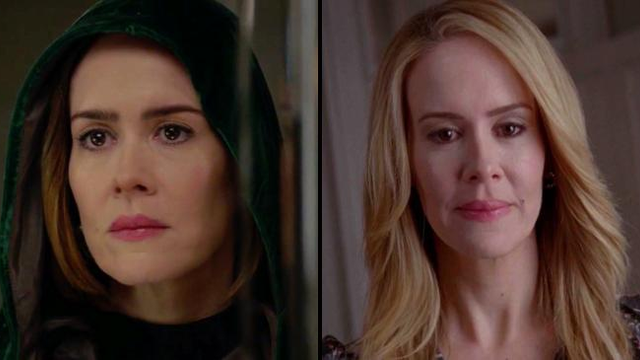 But here's what that ending *really* means...

The ending of American Horror Story: Cult has truly split the fandom in two. There's so much to unpack after Kai's downfall, Beverly's meltdown and Ally's iconic rise to power. But before we even start thinking about all that, let's talk about that shocking final scene, shall we?

After Ally wins her seat in the Senate (honestly, how and why?), she puts Oz to bed and then tells him she was heading out to a meeting with a group of "powerful empowered women". As she goes to her bedroom to get ready, she stares in the mirror and then pulls on this sleek dark cloak. The screen cuts to black. The season is over. We've still got one hundred questions that need answering - namely, what the HELL just happened?

Fans *immediately* lost it at the comment about "powerful woman" and took Ally's comment to Oz as a reference to Coven.

SHES MEETING WITH THE COVEN THIS IS NOT A DRILL!!! #AHSCult pic.twitter.com/7eY9BPr8WP

I think the ending was actually a clue/hint that next season is gonna be some coven shit and I'm SO READY!#AHSCult

is ryan murphy trying to tell me ally is apart of the coven? i think so #AHSCult pic.twitter.com/6ihagmjatY

Was that a Coven reference? Cause like.... I'm here for it! #ahscult

wait ally said she's going to meet powerful women? is she meeting witches? are we going to connect coven and cult?!? #AHSCult

“A group of powerful women”? RETURN TO COVEN. #AHSCult pic.twitter.com/ilJNctPgxi

But it seems like there's more to that specific cape than we all originally thought. The cape isn't Coven black, it's a dark green velvet. More specifically, it was the exact cape that Bebe Babbitt (Frances Conroy) had been wearing when we first met her. In case you forgot, Ally met with Bebe back in episode seven. While we never saw the conversation, it's entirely possibly that Ally agreed to take over the leadership of SCUM after her death.

In an interview with Entertainment Weekly, Sarah Paulson revealed what she thought happened at the end of the series. (She doesn't know exactly how Ally's story ended either, by the way)

"Well it’s the green cloak of the SCUM. It’s the SCUM cloak," she said. "But I think they wanted to keep it sort of mysterious in the sense of what does it mean. And what does it mean to each audience member in terms of how they view the reality now that Ally has power, beyond just personal power."

"What will she do now that she has some sort of beginnings of a political voice and an opportunity to reach further into the world of being a civil servant? What will she do with that? If she is in fact a member of a new group of women who will stand for nothing but the righteous treatment and respect of them, what will that look like? But it shouldn’t be definitive. It should be up to the viewer to decide what it means she’s going to do with this. Does it mean she’s going to kill men? I don’t know."

We know she's not going to switch on us like Kai - she said as much to Oz. But what is she doing, where is she going and how FAR will she go to uphold the message of the group she's taken on?

Maybe she's not gonna do any of that? Maybe she just kept Bebe's cape as some kind of twisted kill souvenir? Or yeah, maybe she *is* about to head to a meeting with Cordelia Foxx, headmistresses of Miss Robichaux's Academy to form some kind of alliance to ensure the protection of women?

Until Ryan Murphy spills the tea, we may NEVER know where Ally was heading for that meeting. Although seeing as this season didn't seem to connect with past seasons as obviously as some would have hoped, we may eventually get an answer in another season down the line.

Haven’t you heard? We’ve got a brand new TV SHOW on Twitter… Watch it LIVE on Thursday at 5pm GMT right here! #PopBuzzPresents