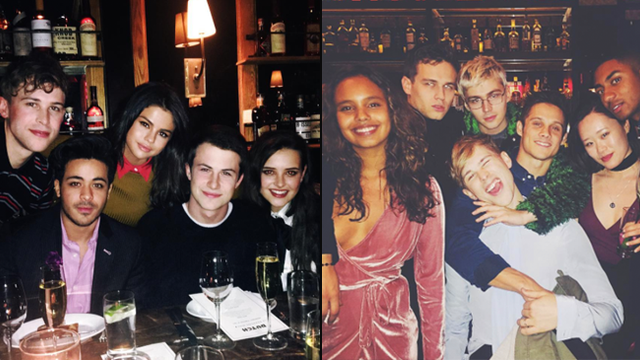 Where does one apply to be part of this friendship group?

You know what's nice about TV these days? It's that there doesn't seem to be any petty feuds between casts of our favourite shows. Just like Stranger Things and Riverdale, the cast of 13 Reasons Why are like a picture perfect friendship group that we wanna be part of - and we're OBSESSED WITH THEM. In fact, they're so perfect that they're kind of making us feel a bit crap about our own friendship groups.

After looking at these snaps from their social media accounts, you'll be feeling the same too.

1) When Selena Gomez, Alisha Boe and Tommy Dorfman got matching tattoos in honour of mental health and the semi-colon project.

SELENA GOT MATCHING TATTOOS WITH SOME OF THE "13 REASONS WHY CAST" IM CRYING pic.twitter.com/Tpe5HMxPzk

2) When they turned it OUT on set in the make up trailer.

3) And when they filmed a 'Wish You Were Here' video for Kate Walsh (Hannah's mum) at the premiere.

4) When Katherine and Dylan posed in front of the Brandenburg Gate in Berlin and made all your sad ship dreams come true.

5) When Ross (Zach) hosted a game night with the cast and made you wanna ditch your real friends and run to his house immediately.

6) When they all hit the bar and posed for this fire snap.

7) When Michele (Courtney) posed with the boys and your inner jealously raged outward.

8) When they all posed for the most FIRE after-premiere snap of all time.

A post shared by Christian Lee Navarro (@christianleenavarro) onMar 31, 2017 at 2:16am PDT

9) When they served pure GLAM for the squad's Halloween outing.

A post shared by Christian Lee Navarro (@christianleenavarro) onOct 31, 2016 at 2:39am PDT

11) When Selena joined a few of the cast for a ~fancy~ dinner.

12) When they went to a 4th July fair together and watched the fireworks.

13) When a rogue Archie Andrews appeared and you suddenly realised how much you want a Riverdale/13RY crossover.

14) When the ENTIRE CAST went to the movies to support Dylan's new movie, Don't Breathe - and you can't even get a text back from your mate.