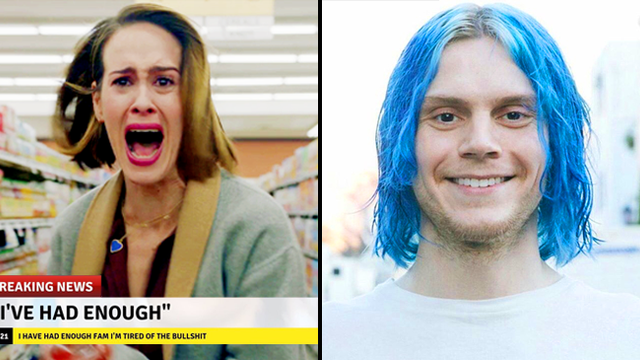 When you've waited 6 seasons for Evan Peters to have a lead role and he ends up playing a racist.

when you've waited 6 seasons for Evan Peters to have a lead role and he ends up playing a racist #AHSCult #ahs pic.twitter.com/bAWRmpYNFl

2) I don't know how many episodes of this I can take. You're really testing me.

me seasons 1-6: god i love evan peters so much

Evan Peters' character is quite literally a psychopath and I'm just sitting here like: #AHSCult pic.twitter.com/K6sJCqt3UB

5) Literally every time someone breathes in Ally's direction.

6) Like, Cult is CLEARLY about the Election, but it's not about the politics... it's like... deeper than that. With clowns.

Mutual: "So what is AHS Cult about so far?"
Me:#AHSCult pic.twitter.com/9UUTol9XVJ

7) Can't wait for American Horror Story: The Return To Asylum.

Guess who's about to end up in asylum again? #AHSCult pic.twitter.com/XJigAHyFtJ

8) Every time you catch yourself feeling sorry for Ally and then you remember...

wait she's upset about the election but she voted for a third party candidate? #AHSCult pic.twitter.com/MTIJupWuWF

9) If that ice cream truck ever bowled up to my neighbour, catch me outside attempting to join in.

Pretending to be one with the clowns after they climb out of that ice cream truck so they don't kill me #AHSCult pic.twitter.com/7pPVcXgSfa

10) This Halloween really hasn't worked out as well as we all wanted it to.

When you think your safe when the commercials come on, and then there is an IT trailer. #AHSCult pic.twitter.com/ab9DzYHePo

11) Kill whoever you want BUT IF YOU TOUCH ANOTHER ANIMAL, I WILL SEE YOU IN COURT.

me watching people be killed by murderous clowns vs me watching mr. guinea being microwaved #AHSCult pic.twitter.com/rxvXenbyYA

12) This was in reference to episode 5 but like honestly... it's the same every week.

13) Kai and Winter have really ruined the sanctity of the pinky promise.

15) At least Twisty had some f*cking manners.

16) Yeah... a child I would immediately give up for adoption.

This season is like if freak show, asylum, and murder house had a child. #AHSCult pic.twitter.com/1ZgvxKwWGk

18) Kai would have already been slapped up side his head.

19) This WHOLE season has been full of white nonsense.

21) A round of applause for Ally's character development please.

When it’s a group project but you end up doing all of the work yourself #AHSCult pic.twitter.com/ONei9KKrwg

24) Am I in some kind of twisted heaven?

Evan Peters hallucinating Evan Peters giving advice to Evan Peters because he can only trust Evan Peters. This is the only thing in life that makes sense. #AHSCult pic.twitter.com/Go7r7T54sJ

25) Something we can ALL agree on.

I am never going to complain about Ally’s screaming after listening to Valerie this entire episode  #AHSCult pic.twitter.com/9uasEt5PXb

27) Me sitting through an entire season of stabbings and shootings and then freaking out over the face skinning scene.

Me laughing at Kai stabbing them but then getting disgusted when he takes off his face #AHSCult pic.twitter.com/KuNrK4cbP6

My girl Ally’s glow up was real. Home girl just use to scream now she be like #AHSCult pic.twitter.com/zcE24I9jE9

29) Back on my AHS theme tune bullshit.