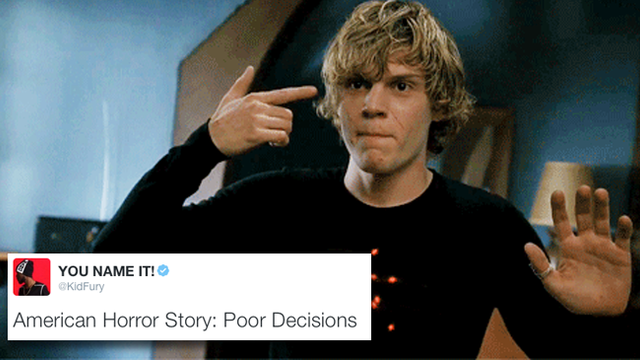 Now that the latest season of American Horror Story is over, it's time to start speculating about the theme of the next one! (We're still holding out for AHS: Ghost Cruise Ship tbh.) Anyone got any thoughts yet? The internet has a lot of feelings about what the next season should be about and honestly, each one is as horrifying as the next.

2) PLOT: Sarah Paulson plays every character and everyone manages to survive.

3) PLOT: This season follows Ryan Murphy as he attempts to lure Jessica Lange back onto the show.

4) PLOT: Angela Bassett's mission, if she chooses to accept it, is to travel around the country putting middle-aged straight white men in their place. It'll be so good, she'll win awards that she's not even eligible for.

6) PLOT: It's basically like The Purge. Brendon Urie will guest star.

American Horror Story Season 7: Everyone After This Election

7) PLOT: Actually, this one is more like American Crime Story.

8) PLOT: It's just a stream of Facebook Lives from the first annual Hunger Games USA. Every tribute is given a brand new iPhone to film the entire thing themselves.

Looks like American Horror Story season 7 is a live broadcast.

9) PLOT: For 10 episodes, Evan Peters goes through your inbox, full of rejection emails from unpaid internships that require at least 30+ years of experience.

10) PLOT: The entire cast of Roanoke returns for another sequel, except it's mid-Spring and the pollen count is high. Kathy Bates sneezes in every scene. She wins an Emmy for it.

11) PLOT: Shot on handheld cameras in real time, the season follows Cuba Gooding Jr locked in a bathroom, trying to create a distraction so he can flush the toilet a second time without Lady Gaga noticing.

12) PLOT: A group of millennials head off on the holiday of a lifetime only to discover that the hotel doesn't have any wifi.

13) PLOT: Evan Peters is forced to do a solo presentation in front of his English Lit class every day for the rest of the year or he dies.

american horror story: speaking in front of the class

14) PLOT: Taissa Farmiga sets up a Tinder account only to be matched with serial killers and fuccbois. Nightmare.

15) PLOT: A crying Sarah Paulson sitting in a tiny room surrounded by phones ringing off the hook.

16) PLOT: Kathy Bates spends 6 hours in an online queue for Twenty One Pilots tickets only to realise they've completely sold out.

17) PLOT: It's just you, staring at your reflection in a blank screen because your favourite show just got cancelled.