8 Killer Theories About American Horror Story: "Election" That Will Give You Nightmares 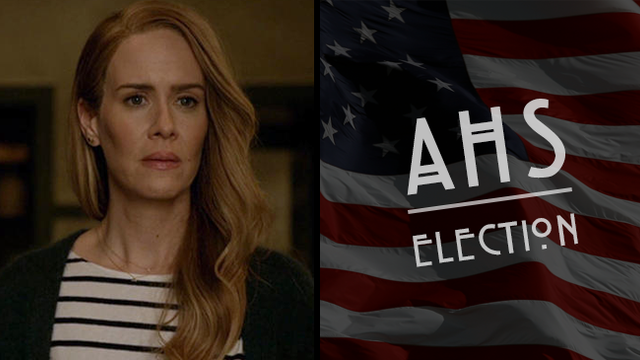 Can you believe Ryan Murphy has already told us the theme of American Horror Story season seven? Like, that has never happened this early before has it? Blessed. Truly.

Some people are speculating that he dropped the theme early to combat any 'bandwagon' accusations after it was announced that another show about the election would be dropping onto our screens soon. That or he was just as sick of the excruciatingly long and painful reveal of season six's theme as we were.

WHO KNOWS? All we know if that we've got some vague clue that it's about the election and now we're sweating about it. In fact, it's been on our minds for a while so we've decided to chop up a few theories about what this season could be about. Strap in.

1) A straight up retelling of the election

The first thing everyone's minds went to when Ryan Murphy announced that the theme of AHS 7 would be about the election was "OMG IT'S ~HILLARY AND TRUMP~". But how exactly would that work? A season that spans from the very first day of that ridiculously long campaign right up to the dying hours of election day? Sarah Paulson and Evan Peters, who have both been billed as the leads this season, going toe to toe with SNL's Kate McKinnon and Alec Baldwin for Best Trillary Impersonations? Nah. We mean it WAS scary but let's get real for a second here.

VERDICT: This is the LAST thing we'll ever see on American Horror Story. There will literally be a full blown aliens in space season before we ever see Murphy's imagining of a *realistic* Hillary and Trump. Besides, that's probably being planned for Feud Season 9.

2) Some kind of hyper-realistic retelling of the election

There's so much controversial and concerning stuff to play with surrounding the election and all the candidates that were once in the running. So if it's not going to be a straight up play-by-play of what happened, why not exaggerate the f*ck out of it? It'd be set in a modern day dystopian world of course, with storylines such as political brain-washing, propaganda, Russian interference and aliens hiding the bodies of humans all in play. OMG, maybe Ted Cruz IS the real zodiac killer? (Nice little Hotel connection there.)

VERDICT: This sounds way too much like Scandal and House of Cards had a love child born into the world of Divergent (minus the aliens). And also... where could the mandatory AHS ghosts fit into all of this? If there's no ghosts, it is even AHS?

3) A season where the election is secondary to the horrors happening *outside*.

Honestly, we're not convinced that the ~E L E C T I O N~ is going to be the main storyline in this. What if the only time you ever saw it or heard it being referenced was on a character's TV screen or in their social media timelines? Murphy did say it was a 'modern day horror story' so what if the horrors were literally playing out as the election happens? Racial profiling, attacks on communities, the resurgence of racist symbols and groups... Seems a bit TOO real for an escapist TV show though, doesn't it?

Imagine a season of American Horror Story that is basically a scary version of National Treasure. Nowwww we've got your attention! If Murphy is planning to go down the government route, there's plenty of conspiracy theories lurking around that would make for an INCREDIBLE season of AHS. First of all, aliens - isn't it time we got an explanation for those Asylum bad boys? There's also many secret societies that previous Presidents are believed to have belonged to. According to this theory on Reddit, one certain society dabbled in occultist rituals and satanism. DING DING DINGGGG.

VERDICT: We kinda like this idea. Only if Nicolas Cage is involved though.

Remember all those jokes about the Purge happening if Trump was voted in to office? Well, here's AHS' chance. Actually, come to think of it, this is kind of like our third theory but slightly more exaggerated. Also, perfect time for that pack of vampire kids from Hotel to come back and terrorise the country.

VERDICT: Even though The Purge: Election Year literally just came out, this would make an INCREDIBLE season of American Horror Story. DO IT ANYWAY. MAKE AMERICAN HORROR STORY GREAT AGAIN.

One of the BIGGEST conversations surrounding the 2016 election was the idea that all liberals live in a bubble where they aren't subject to what's really going on in "real America" because they've immersed themselves in lots of lovely liberal things, or, if you want a musical representation of it, Katy Perry's 'Chained To the Rhythm'. What if AHS 7 featured an entire civilisation that lived in a bubble?

Murphy also suggested that this season is for EVERYONE that voted in the election and that includes the conservatives. So what if there were TWO bubbles? Two stark and opposing groups of people - one full of liberals and the other conservatives and then one day, their bubbles suddenly burst and they're thrown into the world together. HORROR ENSUES.

VERDICT: We've just talked ourselves in to this one tbh and now we really want it happen but it sounds a bit futuristic doesn't it? Also, this is basically the plot for CBS's Under The Dome so maybe not?

Murphy had said that Season 7 will explore more of Season 4 - we're not quite sure if he's still talking about THIS season anymore but we're going with it for the sake of this theory. Freak Show has strong ties and references to nuclear testing and one of the big talking points and concerns about this election (read: Trump in power) was nuclear war and the big red button, WAS IT NOT?!

VERDICT: Sign us up. We're in to it. He's gotta go back and explore that forgotten nuclear storyline at some point!

It's Murder House... but in the White House. And instead of Evan Peters in a rubber suit, it's the ghosts of old Presidents who aren't allowed to leave the confines of the Oval Office.

Of course, we're probably not even close to what Ryan Murphy is cooking up right now. Like, what if he's is just trolling us to throw us off the scent of the real theme? (Which is DEFINITELY 100% going to be American Horror Story: Cruise, by the way.)

Do you have a theory about how AHS will handle the election? Slide into our DMs and let us know!