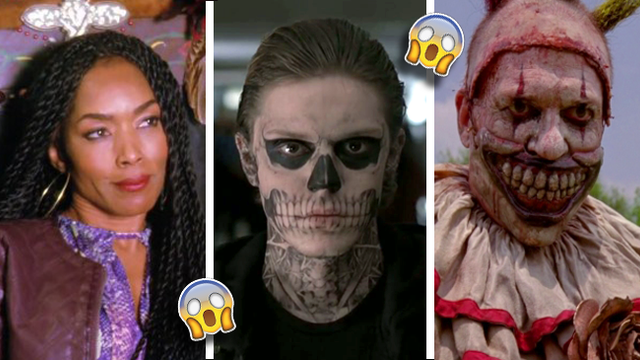 The real life influence behind Tate Langdon might make you re-think your crush...

It's no secret that Ryan Murphy likes to pepper his iconic TV Horror anthologies with real life personalities and events. But did you actually know that like, 89.5% of American Horror Story's plot lines and characters are based on real life events? Yep, and now you're slightly more terrified about watching the show in the dark aren't you?

Here are the creepiest 'IRL' influences behind all your fave characters and storylines.

Remember Elizabeth Short, the young actress who showed up at the Murder House to visit the "dentist" and ended up being murdered, cut in half and mutilated by Dr. Charles Montgomery? She was based on the real life "Black Dahlia" who shared the same name and the same fate as Mena Suvari's character. Yikes!

Ahhh everyone's favourite little Tater Tot. Well, he might not be your fave after this bombshell... Tate's backstory was based on the Columbine High School shootings - one of the first mass school shootings in America. Two students shot and killed 12 fellow students and one teacher, then killed themselves. Tate's black trench coat was a nod to the killers' affiliations to a high school "mafia".

Kit and Alma Walker from Asylum

Precious babies Kit and Alma Walker were actually based on a real life interracial couple Betty and Barney Hill who claimed they had been abducted by aliens back in the '60s. Fortunately, neither of them were subject to any of Briarcliff's questionable methods of therapy.

Yes honey, the white devil was a real person and yes, she was horrendous. Lalaurie was a well known and very popular socialite who reportedly abused and tortured her slaves for YEARS on end. Unlike her beheading on Coven, there's still mystery surrounding IRL Lalaurie's death. Some say she moved to Paris, some say she scammed everyone by faking her own death. Damn!

Can you believe that iconic Voodoo Queen Marie Laveau is a real person? The creole legend was believed to be a hairdresser to wealthy white families and practised Voodoo as her side hustle. Her crypt in New Orleans is said to be in one of the most haunted cemeteries in America and believers visit her tomb in the hopes that she will grant their wishes from beyond the grave. Yo - that's too creepy for us!

JIMMY DARLING IS REAL. Like many of the performers at the "Freak Show", Evan Peters' fourth character was based on Grady Stiles Jr aka the real "Lobster Boy". He was born with hands like Jimmy and traveled with the circus but his life story turned out a little more sinister than Jimmy's. He was apparently an alcoholic murderer who ended up being convicted. YIKES!

Twisty The Clown in Freak Show

Oh hell no. Have fun trying to sleep after this one! Yep, Twisty the Clown was based on real life serial rapist John Wayne Gacy, who performed as a clown and preyed on his victims. He had killed so many young men that his crawl space could no longer accommodate their bodies. He switched tactics and continued killing, eventually being caught and sentenced to death. FFS.

Bette and Dot from Freak Show

Daisy and Violet Hilton served as inspiration to Sarah Paulson's Bette and Dot Tattler. The sisters were shunned at a young age and eventually adopted by someone not too dissimilar to Queen Elsa Mars. Unlike the one body that Bette and Dot share, the twins were joined at the hip, each with a body of their own. They joined a travelling show where they danced, they sang, they each had different personalities almost identical to Bette and Dot's.

Ok, so the union of a bunch of the ghosts of infamous murderers wasn't a real life event that happened but all the guests at the table WERE real life serial killers. James March was based on H.H. Holmes, one of the first serial killers in the modern sense of the term with a body count of up to 200. He was joined by Aileen Wuornos, who killed 7 men while working as a prostitute in 1990; John Wayne Gacy aka Twisty The Clown; Jeffrey Dahmer, cannibal realness and the Zodiac Killer - not Ted Cruz.

The Countess from Hotel

OMFG, The Countess was based on a real person. Elizabeth Bathory was a Hungarian Countess who murdered up to 650 people and became the most prolific female serial killer of all time. Like Gaga's Countess, Bathory enjoyed the blood of young victims to keep herself looking fresh. No word on whether or not she was a low-key vampire but we'll leave you with the image of her bathing in blood and let you make up your own mind!

The Lost Colony from Roanoke

Maybe the story behind the real life Roanoke mystery will help us get to the bottom of what is going on in AHS this season? Roanoke was the real life setting of the infamous "Lost Colony" where 114 members vanished into thin air in the 1590s, leaving no trace of infiltration or struggle. Many report that the ghosts of the colony still walk the land, which would explain Kathy Bates' colonial get up this season.

The Two Murderous Nurses in Roanoke

OH HELL NO. Just when we got over the creepiness of the two murderous nurses from Roanoke, we go and discovered this little nugget of unwanted information. You guessed it, they're based on two real life nurses who killed their patients for sport. They too chose their victims based on the letter of their first name but didn't get as far as the two depicted in the show. THANK GOD.

Well, my name begins with a K so I'm good. What about you? Should we call the ambulance for you now or...? *sweats*