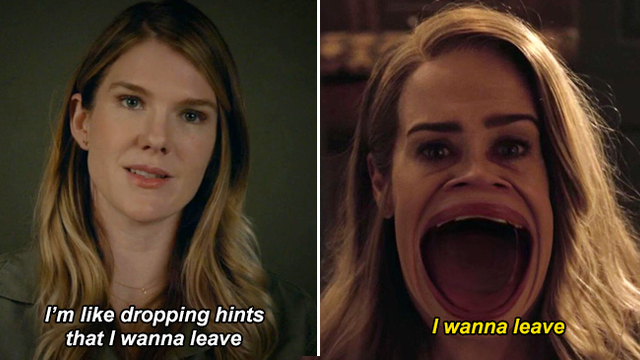 It's done. It's over. We're free! 10 weeks of complete and utter madness, headaches and anxiety inducing plot twists has ended and we have finally escaped Roanoke. The plot lines may have been a complete nightmare (literally) to keep track of but at least it spawned some of the finest memes known to man.

1) Congratulations, we played ourselves.

How this whole season of AHS felt #AHSRoanoke #AHS6 pic.twitter.com/OJ0mfisezt

2) This is basically what happened for the first six episodes of the season. ryan murphy: "the cast this year is amazing"

4) There honestly wasn't enough Evan Peters to get me through winter.

9) Me trying to explain this ENTIRE show to literally anyone.

me trying to explain this season to anyone #AHSRoanoke pic.twitter.com/Zua9M8vZqW

Shelby every episode: "I can't believe I was in those woods again" "I want to leave" "we can't leave" "MAAAAAAAATTTTTTTTTTTTTT" pic.twitter.com/CRROsVkVpJ

12) Literally everyone from episode one through episode 10.

#AHS6 me still trynna figure out this season's theme pic.twitter.com/2ScMDGrlfB

14) When this season of AHS left you a complete anxious mess but it was totally worth it.

#AHS6 in a nutshell pic.twitter.com/k2MXnjYsgG