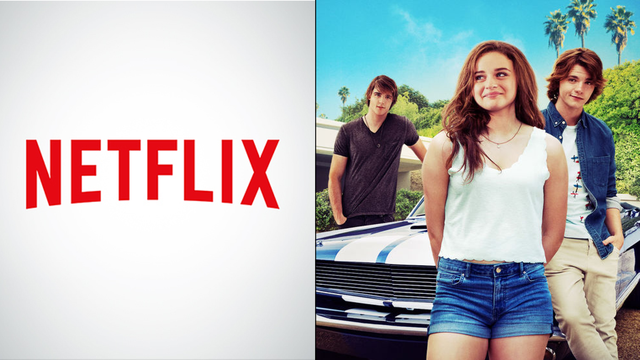 The best new shows on Netflix in May are coming. Here is everything you can look forward to this in May 2018.

Netflix is adding new films practically every day. From their ever-expanding selection of original films, to the comedy specials that keep us cry-laughing, there's nearly an infinite amount of film content to choose from on Netflix.

If you'd rather be cuddled up with your remote and a good snack, here are the best new films on Netflix in May.

New Netflix original movies coming to Netflix in May 2018

The Kissing Booth - May 11 (Worldwide)

High school student Elle and Noah must navigate the choppy waters of first love when they fall for one another under her best friend's nose. Netflix's The Kissing Booth is available to stream on Netflix from May 11.

After a deadly pandemic breaks out, a father must embark on a journey to find someone to care for his young daughter Rosie after he has been infected. Martin Freeman stars in Cargo, streaming on Netflix May 18.

This romantic comedy follows Gillian Jacobs as Harper, a woman from New York who travels to Ibiza on a business trip. Harper and the friends who have tagged along on her trip embark on an epic adventure when our lead falls for a DJ. Catch Ibiza on Netflix May 25.

Editor's choice: If you have to wade knee deep into post-apocalyptic dramas every other week, you might as well make it one starring Martin Freeman.

Best new films coming to Netflix in May 2018

It's Shrek, for God's sake. We all know what Shrek is about.

Talladega Nights: The Ballad of Ricky Bobby - May 4 (UK)

The iconic 2006 Will Farrell and John C. Reilly favourite makes its way onto UK Netflix this month. Catch Talladega Nights: The Ballad of Ricky Bobby from May 4 on Netflix.

The hilarious 2016 comedy starring Zac Efron, Chloe Grace Moretz, Seth Rogen, and Rose Byrne is on Netflix from May 10.

Anne Hathaway and Robert Di Niro make an unlikely pair in the sweet and funny workplace comedy-drama. Watch The Intern on Netflix from May 13.

Steve Carrell's 40-Year-Old Virgin is a classic. The 2005 film about an adult man on a journey for his sexual awakening will be on Netflix from May 16.

Jesse Eisenberg's portrayal of Mark Zuckerberg is as poignant now as it was in 2010. Watch the David Fincher directed film on Netflix from May 18.

Rooney Mara and Hugh Jackman star in the 2015 Peter Pan adaptation Pan. Catch Pan on Netflix from May 27.

Editor's choice: Coco! The animated film was one of last year's best offerings and if you can watch it on Netflix, you won't regret it.

New comedy specials coming to Netflix in May 2018

Hari Kondabolu talks everything from politics to pop culture in his new Netflix comedy special Hari Kondabolu: Warn Your Relatives, streaming on Netflix May 11.

Ali Wong's sharp take on motherhood and marriage as well as the politics of career and money will have you thoroughly entertained. Ali Wong: Hard Knock Life is available to stream from May 13 on Netflix.

Tig Notaro Happy To Be Here - May 22 (Worldwide)

Tig Notaro is back on Netflix. The witty and endearing comedian is, as always, a gifted storyteller in her new Netflix comedy special Happy To Be Here. Stream it on Netflix from May 22.

Steve Martin and Martin Short: An Evening You Will Forget for the Rest of Your Life - May 25 (Worldwide)

Editor's choice: Tig Notaro is always a treat on stage. You won't regret catching her on May 22 in Tig Notaro: Happy To Be Here.