17 Times Tom Holland Was Honestly Too Pure For This World 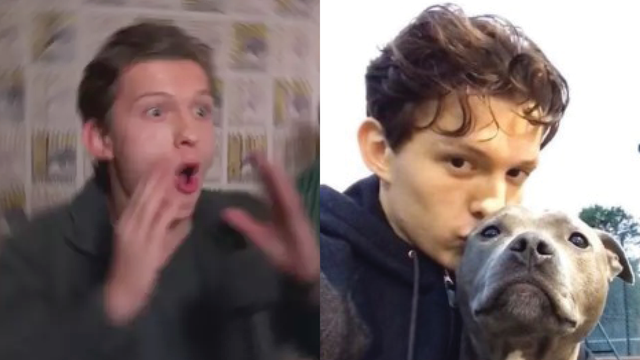 No offence but I love my son.

Tom Holland is an unproblematic sweetheart who loves dogs and acknowledges his status as a perpetual meme. He is very pure. Some would say too pure for this world.

If you never realised Tom was wholesome AF, pull up a seat because class is in session.

1) Benedict Cumberbatch being on hand to stop Tom Holland from spoiling Infinity War was the highlight of the press tour.

the one that started it all last year at d23 when benedict answered a question for tom to stop him from spoiling anything pic.twitter.com/blQ3NB7U5K

We love a dynamic duo.

2) Tom hyping up his friend Zendaya is a shmood.

"All hail the queen. Killing it mate." Real recognise real, you know?

Tom Holland found a missing dog and he's taking him to the vet to see if the dog's okay UGH HE'S TOO PURE FOR THIS WORLD MY HEART pic.twitter.com/sua1fpNSvZ

hi yes please protect tom holland because he’s just updating us on the stray dog he found, named and took to the vet and it’s the purest and softest thing ever I love him so much pic.twitter.com/b2JJiV1R2x

6) Raise your hand if you still haven't figured out whether this was real or not.

9) Tom Holland trying not to spoil Infinity War on the press tour is a big ass mood as well.

10) And I can't ACTUALLY get over Tom talking to Robert Downey Jr's stunt double thinking it was the real Robert.

12) Tom interacting with/talking about his dog Tessa. RT if you agree.

13) Actually, Tom + doggies in general is a blessing.

can we please stop and appreciate tom holland with kids pic.twitter.com/LmWQIhG1X7

15) Has anyone else noticed that he can tell the SHIT out of a late night story?

tom holland listening to the greatest showman soundtrack is something i didn't know i needed until now pic.twitter.com/v6YUBqeDfT

17) When Tom took "a trip down memory lane" and proved he has ALWAYS been Spider-Man.

In conclusion, protect him.