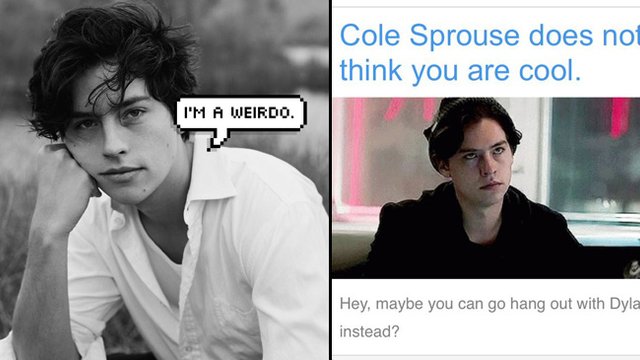 An apology, on behalf of PopBuzz, to the 'Riverdale' star and officially uncool person.

I hope this letter finds you well. How's tricks? Picked up any new photography tips lately?

Anyway, enough small talk, you know why I'm writing to you - it is because you, Cole Sprouse, the Riverdale-starring, former Disney Channel kid and noted hat fan, are officially NOT cool. And it's all my fault.

Yes, much to my surprise, you recently took my highly scientific and 100% accurate quiz entitled 'Does Cole Sprouse Think You Are Cool?'. And the results, as you know, were particularly damning.

"Haha this should be fun." pic.twitter.com/sOhBIxt9DY

I'm as shocked as you are. Who would have thought that the one person who would realise you had zero cool points would be you? It makes so little sense. And yet the results speaks for themselves.

Your fans seem equally heartbroken, as if everything they thought they knew has somehow been revealed as a cruel lie worthy of the Blossom family:

my poster of you fell this morning. is it a sign

Were we all just blinded by your ability to wear a leather jacket? Or did we confuse you with Dylan who must from now on be legally referred to as "Cool Sprouse"? Sad times indeed.

Anyway Cole, I know you must be confused, upset, perhaps even a little angry at the discovery that you are in no way cool and so, for that, I would like to personally apologise. As the author of the quiz, I should have forseen that you would be too tempted to find out the truth, like Neo grabbing at the red pill. I should have gone in like a Hunger Games-style Gamemaker and built-in a trap door ready to crown you 'cool' regardless of your ridiculous answers. That would have been the right thing to do, and I have failed you.

Sadly, we are now living in a world where even hotel lobby worker Mr Moseby is cooler than you are.

So, where do we go from here? Sadly, the quiz result is final - it's not like you could just take the whole thing over and over again until you get the answer you wanted so you can screenshot it and share it to Facebook with a caption like "first time lucky lol". What kind of dishonest world would that be?

Instead, our advice is that you embrace this new chapter of your life with open arms. Start doing typically uncool things without a shred of irony. Go to a Nickleback concert and sing every word at the top of your lungs. Go scouting for antique kettles on the weekends. Go to the movies with your mom on Valentine's Day. Embrace your inner uncool - you will find happiness within that way. Eventually.

I hope this gives you some level of comfort and, again, I am truly sorry.