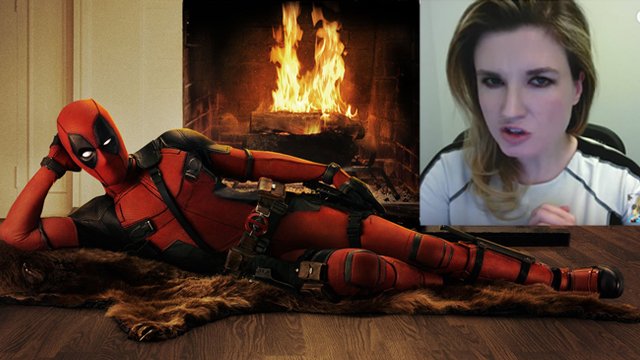 This is R rated for a reason.

YouTuber Grace Randolph posted a highly convincing video this week imploring Fox to release a PG-13 version of upcoming R rated superhero movie Deadpool after her colleague received a (admittedly adorable) list of reasons from her eight year old son of why she has to take him to see it.

The video links to a petition Grace set up calling for a simultaneous PG-13 release which, at the time of writing, has over 13000 signatures.

Ryan Reynolds, the man behind the merc with a mouth, has now commented on the issue at a fan screening in New York, explaining why it simply wouldn't work.

I don’t think so. I mean, you saw it. That would be a very short movie. It’s almost a commercial at that point....People are ragging on her – I think that’s an awesome mom. When I was 8 years old, I wanted to see 9 ½ Weeks, but my mom didn’t make a petition!

It's true that Grace's argument is well intentioned, not to mention nicely balanced and executed. But its also wrong.

Deadpool comics are known for their extreme violence (it features a surprising amount of beheadings) and its often salty language and off-colour jokes. Its all presented in a fun, satirical, winking style that fits its mostly adult (or older teen) audience, familiar with the comic tropes being twisted and exploited. It is not, however, aimed at 8 year old kids.

Don't get me wrong, I am all in favour of kids getting into comic books and superheroes but there are specific titles and movies that are not made with them in mind. PG-13 rated fare like the Marvel movies or even the upcoming Batman vs Superman are far more child-friendly subjects that would provide endless enjoyment for the pre-teen crowd. But Deadpool is an intentionally darkly funny, adult property that, if nothing else, would probably baffle and bore any child after the third explosion.

Why is everyone laughing mommy? And where did that man's head go? And why does he keep referencing early 90s hip-hop double act Salt 'N' Pepa? More importantly, how did I even get that reference - I was born in 2006!

Equally, simultaneous releases would set an odd precedence for future movie franchises. Would another Blade sequel need to cut out its trademark vampire slaying? How about we trim down The Godfather trilogy to just the weddings? It's what the kids want right?

Obviously, the fact that this is a superhero movie is what has attracted children to the franchise, the original PG-13 teaser trailer getting them excited for the release of a movie they won't be able to view. That part is slightly unfortunate and I can understand the disappointment. Perhaps in future, studios should just avoid placing trailers for R rated movies in areas targetable to the pre-teen market.

But the fact remains, this is an R rated film for a reason. The violence, strong language and nudity may be easy to edit out but would remove the hilarious, corrupted soul of the movie.

Ryan Reynolds even joked about the ridiculous prospect in an April Fools prank video last year:

And yes, I know we are talking about a simultaneous release and not a straight-up butchering. But there will be more than enough time to see this type of movie when the current crop of young comic fans grow up. Let's not shortchange them now with an inferior product.

So, to that poor 8 year old kid, I say this - I get it. You like superheroes and that's awesome. But wait a few more years before you see this movie. You'll appreciate it even more if you do.