Bet you probably forgot a few of these iconic on-screen moments.

Have you ever had a moment where you're searching for Evan Peters GIFs and you find one but you just can't place what film or TV the GIF is actually from?! Same here. In fact, we do it everyday.

Just before he returns to our screens as 'Whoknowswhat' in American Horror Story: Season Six, let's take a look back at Evan Peter's iconic on-screen career. Unless you're President of the Evan Peters Fan Club, we guarantee a few of these would have slipped through your web of fangirl.

Evan's very first on-screen appearance was in Sleepover (2004) at the tender age of 17.

Ahhhh, the infamous bra gif! He hasn't aged a day since, has he? Damn it, Evan!

Next up, Evan took a turn as Cooper Days in the short-lived ABC show, The Days.

You probably never saw this series but the idea of Evan Peters going full emo and wearing eyeliner is enough to send you running to YouTube, isn't it? Here's a clip just incase you can't bear to be missing out on it any longer.

And then he started rolling in that Disney Channel money on a little show called Phil of the Future. You may have seen this show if you were a self-respecting Disney Channel addict back in the day but we BET it hadn't registered that Evan Peters has been creepin' on your childhood since 2005.

Now let's flash forward to 2008 where he appeared in One Tree Hill. (YES. WE KNOW, WE DIDN'T REALISE EITHER!)

Ever watched an episode of House? Chances are you probably missed the one Evan Peters was in. He played a patient who gets taken hostage in the clinic. Yikes!

Bet you didn't catch Evan Peters in Ghost Whisperer either, did ya?

He played a ghost before he made playing a ghost a thing.

Ok, here's one you'll know... remember when Evan Peters was in Kick Ass? Of course you do!

Sadly, he didn't return for Kick Ass 2 but his presence in the first movie was a blessing in itself. It's worth noting that Kick Ass arrived 6 years after his appearance in Sleepover and he has YET to cut his hair.

Chances are you've binge watched The Office once or twice in your time on this earth but do remember when Evan Peters made an appearance?

Then he was in a movie called Adult World.

Then, of course, we find ourselves in the X-Men era - how could we forget Evan Peters in that!?

We've had dreams about that silver wig, many a time. 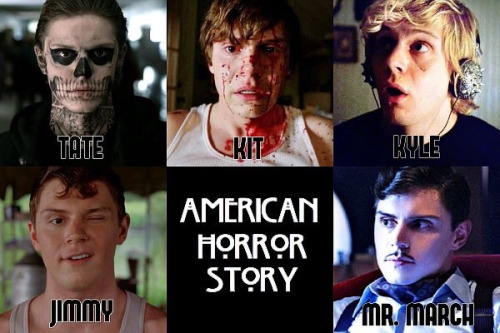 He's come such a long way since the Bra movie. Precious bb!

How many have you seen? Check 'em off and let us know in the comments!