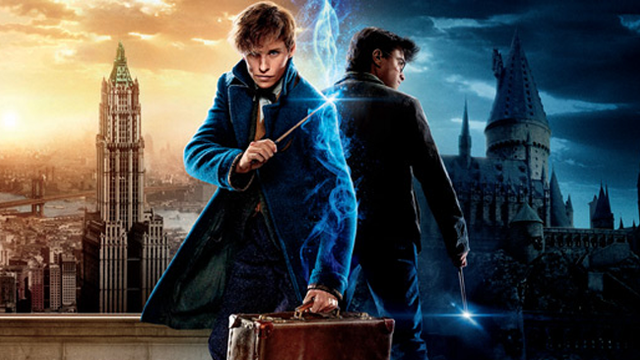 Just because we aren't at Hogwarts doesn't mean we've forgotten all about it.

It's been almost 20 years and we just cannot get enough of the wizarding world. We'd be lying if we said we hadn't shed a few tears over how much we missed Harry and the gang but as soon as Fantastic Beasts dropped, it was like he had never left at all. Throughout the movie, we couldn't help but notice a handful of familiar references to the franchise we've had memorised since childhood but did you manage to spot them too?

If you've yet to see Fantastic Beasts (ummm, why the hell haven't you!?) consider this your SPOILER WARNING! If you don't care... proceed to the goodies!

As Newt arrives in New York, he hands over his "muggle-worthy" suitcase to the customs officer who opens it to reveal a scarf baring very familiar colours. Yep, it's exactly what you think it is - Newt is a Hufflepuff and that scarf has come straight from Hogwarts. Still reppin' those Badgers - even after being expelled! Respect.

For those of you who have read the books (it's alright if you haven't, we're not judging), you'll remember that Professor Grubbly-Plank taught a class on Bowtruckles in Harry's fifth year. Ugh, if only that scene made it into the movie - think of all that extra Bowtruckle action we could have had!

Yep, another one of our favourite beasts that was tragically omitted from the original HP movie franchise. In Order of the Phoenix, Lee Jordan wingardium leviOsa'd two Nifflers into Professor Umbridge's office to cause absolute havoc. Of course, because they're in the care of Hagrid, he ends up getting the blame.

In Fantastic Beasts, we learn that Newt was low-key in love with Leta, a member of the infamous pure-blood family the Lestranges. While she most likely bares no blood relation to Bellatrix, who descends from the House of Black, there's a pretty good chance that she's directly related to Rodolphus and Rabastan. (Also, sidenote: A pure-blood Slytherin hooking up with a Hufflepuff? We're into it!)

5) The bewitched sky in the MACUSA building... remind you of anything?

Yep, the Magical Congress of the United States of America has a very similar ceiling to the one we've all come to know and love from Hogwarts. No doubt Hermione once read about it in Hogwarts, A History.

6) The oh so sly and sneaky reference to Quidditch.

When Newt arrives in New York City, he stumbles across one of Mary Lou Barebone's Salem gatherings. Upon noticing a new face, she asks Newt if he was a seeker. To which he responds: "I was always more of a Chaser." WE SEE WHAT YOU DID THERE, NEWT!

7) Shoutout to all the Dragons we've loved and lost.

Newt reveals that he once worked with a Ukrainian Ironbelly dragon during the First World War which just so happens to be the exact breed of Dragon that was used to guard the Lestrange Vault at Gringotts before Harry, Ron and Hermione helped it escape, obviously. Interesting. Very interesting...

8) The tale of the Erumpent horn.

Remember the Erumpent, the rhino-type creature that provided a few laughs after chasing Kowalski through Central Park? Turns out that Xenophilius Lovegood once housed an Erumpent horn in his home, thinking it was a Crumpled-horned Snorkack. Hermione, who has obviously been reading Newt's book, warned Xenophilius of the dangerous fluid that lies within the horn but he doesn't listen. Five minutes later, his house explodes... Oop.

Remember the magical shield that the Professors cast in Deathly Hallows to protect the castle against Voldemort and his m8s? The magical congress whip up the exact same shield when they head down into the subway to get rid of the Obscurus. Oh, the memories.

10) Oh, and then there's all those familiar spells and charms.

Accio, Petrificus Totalus, Alohamora... Turns out that the majority of wizarding spells are the same across the pond. But you probably didn't miss those references, did you? Because you screamed when you heard those all too familiar words!

In Fantastic Beasts, it is speculated that Credence is a Squib - someone born from one or two magical parents who bares absolutely ZERO magical abilities, like Argus Filch. Looks like the American wizarding world doesn't have a stupid name for Squibs then... *cough* No-Maj *cough*

The chiselled yet ever so slightly creepy Graves puts a necklace around Credence's neck when the pair are standing in a quiet alley. It turns out that the necklace bares the Deathly Hallows symbol which totally makes sense once we found out that Graves was in fact Grindelwald all along. (Grindelwald and Dumbledore were both high-key obsessed with obtaining the three magical objects, so much so that they ended up wearing the damn merch.)

13) Queenie possesses the exact same powers as Snape and Voldemort.

Queenie is a VERY skilled wand-less Legilimens which means she can read people's minds, and their personalities. Unlike Voldy, she mainly uses her powers to sleuth on the inner thoughts of the men she fancies.

14) The iconic "Hedwig's Theme" gets a ~FANTASTIC~ orchestral remix.