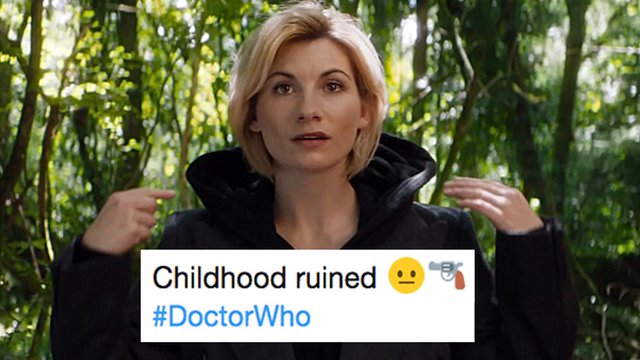 As Jodie Whittaker is announced as the latest actor to take on the iconic TV role, we'd like to give all the manbabies complaining just a little bit of perspective.

After months of speculation, the BBC finally announced that the next person to take on the role of Doctor Who would be Jodie Whittaker, much to the acclaim of anyone with common sense.

Seriously, have you seen her in Broadchurch? This is gonna be ace.

But, as expected, there were also more than a few man-babies screaming into their computer screens about how the sight of a female portaying an alien time traveller has somehow "ruined their childhood".

Great, now doctorwho has now fallen for the women's rights act. Ruined one of my childhood memories. #DoctorWho13

Remember kids, it's Doctor and Eve, not Steve and the Doctor (or something like that).

Anyway, these sad moaning b**tards may be angry now but I find myself oddly jealous of them. Can you imagine if the only thing that has ever "ruined your childhood" was a new actor taking over a role in a TV show? Nope, you ain't known childhood pain unless you've experienced any of this nonsense:

1) Spending my entire teenage years literally covered in zits while my friends walked around with the clear skin of a f*cking ken doll.

There's only so much concealer a 15 year old can afford on a weekly allowance.

2) When I left my P.E. kit at home and had to play basketball in vest and pants.

Irony is, I'd left my kit at home on purpose in the hopes I'd get excused from the class.

3) When I realised that Drake & Josh are not actually friends in real life.

4) When Mufasa wouldn't wake up.

There I was thinking that this would be a nice funny film about some lions messing about but NO, this had to happen. There were defo tears before bedtime that night.

5) When I found out Santa wasn't real via a friend's Grandma, two weeks before Christmas.

Shout out Mrs Murchison for dropping that clanger on my 5 year old self. This is why you shouldn't drink gin at 3pm on a Wednesday.

You 1D fans think your pain is original but we've all been here before. See also when MCR broke up.

7) When the Harry Potter & The Goblet Of Fire book came out and I couldn't get a copy on release weekend and my friends all read it super fast and gave away the ending like a bunch of hateful pricks.

This is not what JK would have wanted.

8) When I spent an ungodly amount of money on beanie babies, Pokémon cards and POGs only to later find that they are worth precisely f*ck all.

I was promised that these were an INVESTMENT FOR THE FUTURE!!!

9) When I went to Disneyworld on my 8th birthday and the waiter found out and made Minnie Mouse bring me out a cupcake and get everyone to sing and I crawled under a table and slowly died.

The happiest place on earth is not so happy when you are on display. Nice intentions though obviously.

10) When I went back home to visit friends recently and we ended up in our fave club and realised it was full of underage people and that we are now officially old.

Maybe we always were this old. Who can really tell?

11) When I studied super hard for my Maths exam in 5th year, came out with a really good mark then realised I would never use any of those skills in real life ever.

When was the last time you tried to calculate the square route of anything? Seriously, be honest.

12) When I got really excited about literally anything happening in Doctor Who only to have a bunch of old farts who haven't washed since the Tom Baker-era subtweet me to tell me how wrong I am to enjoy something not specifically aimed at them.

Think we all get the point with that one.

Jodie Whittaker will become The Doctor in the show's upcoming Christmas special. I can't wait.