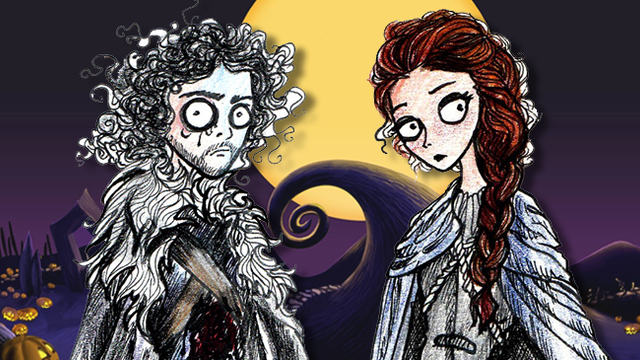 Someone commission a Tim Burton style illustrated version of this show right now!

It is a universally known FACT that anything illustrated in the style of Tim Burton immediately makes it 10,000x better than the original - whether it be a dark twist on your favourite Disney characters, or even some of your favourite Youtubers. It turns out, the same can now be said of your favourite human TV shows!

Illustrator Xenia Rassolova, who sketched these masterpieces for Obsev, has taken inspiration from Tim Burton's spidery, wide eyed creations and has turned the characters of 'Game Of Thrones' into the perfect next door neighbours for Jack Skellington. Someone commission this as an illustrated series NOW!

1) Jon Snow and true King of the North, Ghost (who could totally pass for Jack's dog Zero.)

2) Daenerys Targaryen, Queen of Halloweentown and the Seven Kingdoms.

3) Sansa Stark, who might just replace Sally in the cold dead heart of Jack Skellington.

4) Samwell Tarly, who literally looks like the boy from 'Frankenweenie' all grown up.

THIS IS SO AMAZINGGGG!

But if ~actual~ Tim Burton could bring your favourite TV shows to life in his iconic gothic style, which one would you wanna see? We want all of them and we want them NOW!

You can find the rest of the illustrations, including Cersei and Jaime Lannister, Margaery Tyrell and Bran Stark, over at Obsev.