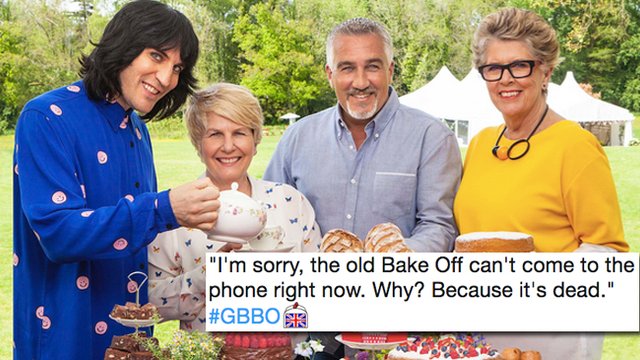 With a whole new team on board, here's how the internet reacted to the return of TV's tastiest show.

Forget Game Of Thrones - the real TV event of the year began last night (August 29th) as The Great British Bake Off finally made its tasty return to our screens with a new set of host, a new judge and a load of brand new, delicious looking cakes.

New goal - to feel about life how Flo feels about her melon cake. #GBBO pic.twitter.com/VZLjFAZ4IQ

Believe it or not, that's not actually a watermelon!

And, as usual, the internet came through with all the best screenshots, memes and reaction GIFs to kick off the new series. Here are just a few of our absolute faves:

1) The new presenting team of Noel Fielding and Sandi Toksvig made a real impact.

I'm sorry but the old Bake Off can't come up the phone right now.. Why?.. Oh, 'cause they're dead. #GBBO. pic.twitter.com/9bqVnvp2C3

2) Although a lot of people still miss Mary, Mel and Sue.

Giving the new Bake Off a chance, then realising how much you miss Mary, Mel and Sue #GBBO2017 pic.twitter.com/Tzuh2kkTYz

My face after two minutes of the new Great British Bake Off. #GBBO2017 #gbbo #GBBO pic.twitter.com/GHGGpPAxLD

The nation's face while watching the new Bake Off. #GBBO pic.twitter.com/5W9WezPuDJ

3) Then there was the small matter of those ad breaks.

When you realise Great British Bake Off now has adverts #GBBO pic.twitter.com/AlOMrqQwGo

"Are you watching Bake Off now there's adverts and Mary, Mel, and Sue are gone?!?!!"

seeing adverts for bake off and then realising it's not the REAL bake off pic.twitter.com/MKEYgpsgba

4) But, once we all got settled, there was only one question worth answering - who is your Bake Off crush for 2017?

Tom is my bake off crush this year I mean just look at him #GBBO pic.twitter.com/MwZ6x0O5Q8

Okay. First #bakeoff crush on the go. Scottish and handsome. This change to C4 may not put me off after all......

Julia is this year's bake off crush!

Panic over - new Bake Off is pretty much the same as old Bake Off. Plus I've got a crush on at least one contestant so I'm in. #GBBO

So,I have developed a Bake Off crush within 90 seconds of it starting. I'm scared to go on and ruin it. (Also don't know his name yet) #GBBO

5) Oh yeah, and there was the small matter of the cakes themselves!

Believe it or not, this is a chocolate cake. #GBBO pic.twitter.com/GnSKXipsr7

Bake Off continues every Tuesday night on Channel 4 in the UK. Let us know what you think about the changes on our Facebook page.