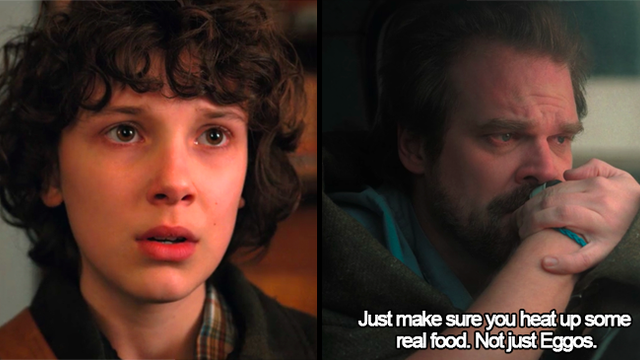 Hopper as a dad is my religion now. (This article contains spoilers.)

Without a doubt, one of the most satisfying parts of Stranger Things 2 was seeing Eleven and Hopper, the two outsiders, together acting like a little dysfunctional family.

At the end of the first episode, it is revealed that Eleven has been living in Hopper's cabin after he found her wandering through the woods in the cold. He took her in and has been cooking dinner and supplying her with Eggos ever since.

To be honest, Eleven and Hopper are like 2017's version of Matilda and Miss Honey. The unlikely pairing of a kid with telekinetic powers and an adult who really doesn't quite have their shit together but will do anything and everything to protect their baby sidekick, even if that means adoption? A concept we wholeheartedly approve of.

Needless to say, the internet absolutely CANNOT cope with the pairing either.

Hopper is raising Eleven like a daughter. #StrangerThings pic.twitter.com/rStpPcGsBg

me showing up for the hopper/eleven father-daughter relationship i've been waiting for since season one pic.twitter.com/eVSIFfPluR

JOYCE WAS LIKE A MOTHER TO ELEVEN IN SEASON ONE AND NOW HOPPER IS TAKING CARE OF ELEVEN LIKE A FATHER pic.twitter.com/4g55DpkVNe

Eleven trying to convince Hopper to take her trick or treating is my new favourite thing #StrangersThings2 pic.twitter.com/Y6AiAyDNeL

eleven is wearing the blue bracelet that hopper always wears (aka sara’s old hair bow) at the snowball with mike. i’m really nOT OKAY pic.twitter.com/g5y7CcBArR

hopper’s love for eleven is really under appreciated pic.twitter.com/UqFq2b0y5C

still cannot believe hopper is now eleven’s legal guardian this is truly the best unexpected storyline of my life pic.twitter.com/9nprdzRzvU

Personally cannot wait for Stranger Things 3 when Hopper and Joyce finally shack up, Eleven and Will become siblings and Hopper is just being the best dad to every kid on this damn show.

Netflix's Cheer: Will there be a season 2 with Navarro College?

Sabrina season 3 release time: When does Chilling Adventures Of Sabrina come out on Netflix?