Dear Netflix, Cancelling "House Of Cards" Was The Ultimate Insult To Robin Wright And I'm Fuming 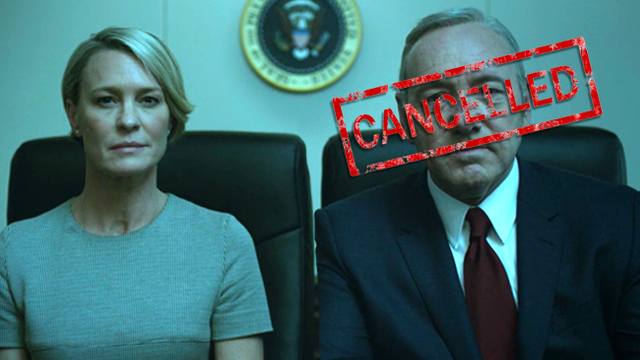 UPDATE: It's now been reported that the writers on House Of Cards are currently working on writing Kevin Spacey and Frank Underwood out of the show completely. Production will be shut down for up to two weeks.

In case you missed it earlier this week, actor Kevin Spacey was accused of forcing unwanted sexual advances on actor Anthony Rapp who was just 14 years old at the time. Minutes after the allegations were made public, people were already calling for Spacey to be fired from his TV show House of Cards but Netflix went one step further and cancelled the whole. damn. thing.

Before we get into anything, we should probably point out that it’s been reported by The Hollywood Reporter that the sixth season of the show was allegedly intended to be its last anyway but they hadn’t announced that yet. Netflix tend to play by their own rules when it comes to renewing and cancelling shows but many fans thought the cancellation of the ENTIRE series was a bit too much.

Why? Well, people can’t seem to get their heads around the fact that it looked like no one thought Robin Wright could helm the show on her own well enough for them to hold back on the immediate cancellation.

Like, why not just fire Spacey, kill off Frank Underwood and let Wright and Claire Underwood run the show?

I get why they cancelled house of cards but like can't they just kill frank and have claire run everything? It was heading there anyway

So dumb. Just kill off Frank and let Claire handle business. What a slap in the face to Robin Wright. https://t.co/DMuuipA3LC

It’s not fair that the rest of the cast of House of Cards have to suffer because of Kevin Spacey. Just make Robin Wright the lead ! pic.twitter.com/l8Ndah1yt3

FIRE KEVIN SPACEY AND LET ROBIN WRIGHT BE THE LEAD OF HOUSE OF CARDS LIKE SHE HAS DESERVED FOR SEVERAL SEASONS NOW pic.twitter.com/aD1HCgVu0M

If you’re telling me that Netflix doesn’t believe Robin Wright could helm the show on her own then I’m calling bullshit. Why on earth wouldn’t you want to continue a successful show with a) a character who has, let’s be honest, been running the joint for at least three seasons and b) an actress who everyone loves and who literally just played one of the most talked about characters in one of the highest grossing movies of the year. To be honest, it’s probably not that deep and things are being negotiated as I type but still, it’s the damn principal.

This isn’t the first time Robin Wright has been jipped by her own damn show either. Despite her appearing in as many episodes as Spacey, directing SEVERAL and eventually signing on an executive producer on the show, she had to fight to receive equal pay as her male co-star.

Killing off Frank would set Claire on an entirely different path. If anything, that should surely open up even more doors and even more potential storyline for her character. For starters, a dead husband would immediately work in her favour in terms of popularity and sympathy votes. All the shady goings on that happened during their administration - should they be exposed - would now be solely on her and she would have to make the decision to either carry on his scheming or clear the slate and start her own.

Basically, Claire Underwood deserves more than one measly 13-episode season to wreak her own havoc on DC and create the legacy she always deserved out of Frank’s shadow but now it seems like she might not even get that.

The show has currently shut down production until further notice. It is unknown when (or if) they will even pick it back up. Hopefully, this means that they’re scrapping whatever is in production right now and re-writing the season so they can write Spacey out completely without him even having to return to film at all.

“But how the bloody hell do you do that? Frank is the MAIN CHARACTER!? He’s the PRESIDENT!” Well, first of all, no. Literally most of season five featured Claire as the acting President before she was officially sworn in - didn’t you fucking watch it? Second, his irrelevant ass should have died at least two seasons ago. He’s basically as good as gone anyway. And third, just ask the good sis Shonda Rhimes.

Tons of others shows have successfully written main out characters with absolutely no explanation after the actor portraying them proved problematic. Shonda, creator of Grey's Anatomy and Scandal, just happens to be the master of it. While none of her actors have ever proven as problematic as the accusations against Kevin Spacey (except maybe for Scandal’s Columbus Short who was allegedly fired over domestic violence accusations), she has mastered the art of making a character disappear and manages to pull it off every time.

Isaiah Washington got the chop from Grey’s Anatomy almost immediately after an alleged homophobic slur against then-closeted cast mate TR Knight. His character Dr Preston Burke hopped on a plane to Switzerland at Sea-Tac with no warning just as he was about to walk down the aisle to marry Cristina Yang.

Shonda even managed to make the hugely popular Izzie Stevens disappear after some shit went down between her and Katherine Heigl. Izzie was written out in middle of some huge storylines. She was recovering from cancer, she’d just got married to Alex Karev… there was SO much story left for Izzie’s character but Shonda wrote her out and she made it work. To this day, I regularly forget Izzie even existed in the first place.

House of Cards can easily replicate what they did with Columbus Short’s character Harrison on Scandal. Open the season with his funeral. No questions asked. Don’t even have to reference him. People die off-screen in extremely suspicious circumstances. Get ‘em hooked. Leave ‘em guessing. How did he die? That’s a secret I’ll never tell. Xoxo, Madame President.

I mean, there’s already TONS of iconic ideas from fans on Twitter that the writers could steal if they wanted. (They should… because every single one of these just sent my wig into orbit and Emmy voters scrambling to tick Robin Wright’s name on the ballot paper.)

I hope Robin Wright kills Kevin Spacey in the first episode of the new season. Netflix should definitely consider this as an option.

In the wake of the cancellation, multiple spin-offs of the show are already being discussed with Doug Stamper and Raymond Tusk as potential candidates. (No offence to those brilliant actors but can you imagine anything more boring that having to watch Doug Stamper as a main character on his own show… Please.) So far, not a single Netflix birdy has hinted at Claire Underwood’s own spin off, which is - if we really are shutting this gig down - the only spin-off we need. (Also wouldn’t mind one for Remy Danton but that’s another rant for another day.)

We guess the real question here is; do Netflix want to continue promoting a franchise that Spacey has been the face of for almost five years. No matter what happens in the future, his name - and credit where credit is due, his incredible work - will ALWAYS be associated with that title and if we were to continue with Claire’s story, would all of that baggage even be fair to Robin Wright? Would she even wanna participate in that in the first place considering her involvement on the show has effectively just been tainted by association? And would she want to start it all again on a brand new series?

Obviously, no TV show is bigger or more important than serious sexual assault or harassment claims - not ever, in fact - but whatever happens, let’s just hope Wright gets the chance to live her best life as President Claire Underwood, be it on the original show or in her own spin-off. To deny her that chance and several Emmys she has yet to win because of Spacey's actions would be the highest form of treason.

So here’s what we’re gonna do, Netflix. We’re gonna get into the writers room (I’m available anytime, skype me in, fly me out, whatever you want…), we’re gonna kill off Frank Underwood and we’re gonna enjoy it. Then we’re gonna open the sixth season with his funeral, we’re gonna let Claire prosper, scheme and maybe fuck some more people to death and then… we’re give her her own spin-off and we’re gonna pay her DOUBLE.

If women weren’t disposable in Hollywood, they would have done House of Cards with just Robin Wright. https://t.co/4Rs7WXbL5y

To All the Boys 2 memes: The best reactions and tweets from P.S. I Still Love You

Where to buy Jeffree Star Blood Lust palette and collection

Apple Music Replay 2020: Here’s how to see your top songs